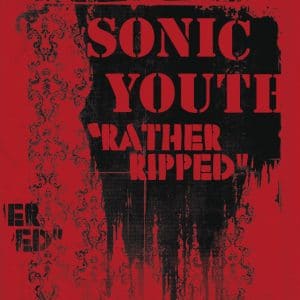 For 25 years Sonic Youth have been ably treading the line between pop and experimentalism and just occasionally they manage to achieve something that changes the face of music as we know it.

1988 saw the release of their landmark album Daydream Nation, and it has attained such a legendary and revered status that it seems Sonic Youth may never scale such groundbreaking heights again. It’s not that they’ve been struggling to create great music for the last 18 years though. From their major label debut Goo to the bewildering experimentalism of Goodbye Twentieth Century, Sonic Youth have always produced some challenging and exciting music. It’s just that many of their recent albums have been patchy, with only occasional glimmers of genius.

Rather Ripped sees the band heading into far more commercial territory than usual. If Murray Street took on the prog rock of the ’70s, then this is SY pillaging the ’60s for the greatest pop sound and making it their own. It reeks of sunshine and festivals, it’s a sprightly breeze of a record.

Opener Reena sees Kim Gordon singing, rather than the bellowing of lines that we’ve come to expect from her over the years. It’s like listening to Nico on a bright Sunday morning.

Gordon’s voice is not the only step away from dissonance in evidence here. Jams Run Free features arpeggiated guitar lines that weave in and out of each other, ringing like wind chimes caught by a freak gust of wind on a baking hot day. There’s not a hint of crashing waves of a guitar tsunami on the horizon at all.

Turqoise Boy is beautifully understated, with a husky vocal from Gordon and delicate guitars from Thurston Moore and Lee Ranaldo that eventually work themselves into some wonderfully hectic noise midway through the track. There are also guitar solos that actually sound like guitar solos: as in the rock band, widdly widdly twin guitar break kind of solos. Not the kind of thing you’d usually find on a SY record. There’s even something approaching sincere lyricism in the godly Do You Believe in Rapture? – Thurston Moore seems to be constantly on the brink of an epiphany throughout the track.

This is not to say that the usual elements aren’t present of course. There are walls of discordant guitars, there’s the familiar rumble of Steve Shelley’s drums driving the chaos to its logical conclusion, it’s all here. It’s just that on Rather Ripped, these elements are way back in the mix, they are used sparingly to add tone to the songs. If Daydream Nation was a record that focused the attention on guitar experimentalism, then Rather Ripped is SY’s homage to the pop song. It’s the best thing they’ve done in some time.