Sons Of Kemet – Black To The Future

by Daniel Paton
published: 17 May 2021 in Album Reviews
Tweet 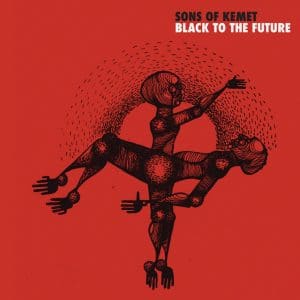 Saxophonist, clarinetist and composer Shabaka Hutchings has, whether consciously or not, assumed the mantle of a facilitator and mentor for a new generation of British jazz musicians now crossing over to more mainstream exposure and success. Given his open admiration for musicians such as Steve Williamson, Hutchings is probably more likely to (correctly) perceive this much heralded ‘explosion’ more as continuation and development than a sudden resurgence, but it is hard to overstate his importance to the scene as it is.

With his three bands (The Comet Is Coming, Shabaka And The Ancestors and Sons Of Kemet), Hutchings has created a compelling range of musical expression, also drawing from his considerable knowledge and understanding of history, literature and cultural theory. Ideally, Hutchings’ work should be appreciated in its interlocking totality as well as assessing the specific concerns of Sons Of Kemet.

Sons Of Kemet (now comprised of Hutchings with Theon Cross on tuba and drummers Tom Skinner and Eddie Wakili-Hick) are often described as Hutchings’ ‘party’ or ‘dance’ project. Given their emphasis on insistent, memorable motifs and forward motion, there is of course a degree of truth in this. But the project has also consistently drawn from a wide range of African and Caribbean musical culture and experience.

Black To The Future may be Hutchings’ most assured and imaginative synthesis to date, illuminating the common threads within the rhythms and instrumentation of New Orleans, the radical futurism of Sun Ra, nyabinghi (Ras Michael and Sons of Negus, Dadawah and Count Ossie), soca and calypso, and influential British funk bands such as Cymande. Hutchings achieves this within a contemporary framework, also imposing a melodic sensibility that is distinctively his own.

On Black To The Future, the palpable sense of urgency is directed as much towards elucidating the context and history of black experience (the murder of George Floyd and the Black Lives Matter movement) as it is towards physicality and movement. Dance in this context is surely an expression of both celebration and struggle (“I was born from the mud with the hustle inside me,” Kojey Radical half-sings on Hustle).

This is also Sons Of Kemet’s most nuanced and surprising work, brimming with thoughtful arrangements and details. The familiar elements of the Sons Of Kemet sound – interlocking, energising drum parts, insistent repeating motifs and tuba bass lines – are all present and correct. Throughout, Skinner and Wakili-Hick prod, propel and press the ensemble. Hutchings’ woodwind arrangements, added during lockdown, greatly enhance the range of moods and textures and help make Black To The Future such a distinctive statement.

On the propulsive Pick Up Your Burning Cross, staccato figures punctuate the vocal contributions of the dependably excellent Moor Mother and Angel Bat Dawid. On In Remembrance Of Those Fallen, the woodwind parts accompanying the improvising are gentle and fluttering. However percussively layered and consciously arranged this music might be, it is also compelling for its sense of space.

This may be part of Black To The Future being an album in the old fashioned narrative sense, its tracks sequenced to create a long form musical experience and also so that their titles comprise a poetic statement when taken together. It is bookended by two musical settings of poems by Joshua Idehen, both fierce explorations of sound and fury that are overwhelmingly powerful (Idehen’s closing call to “LEAVE US ALONE” lingers long after the needle has been reset). These pieces are necessarily confrontational and unsettling, Hutchings’ saxophone lines on Field Negus complementing the turbulence and stridence in Idehen’s delivery (“I do not want your equality, it was never yours to give me and even then it was too minor, too little, too late”).

In between these striking statements, Hutchings has highlighted the shift in the album towards more ‘inner’ journeys at the album’s centre. There is certainly a broader range of dynamics, mood and pacing. Tracks like Think Of Home, To Never Forget The Source and Envision Yourself Levitating feel more reflective. In Remembrance Of Those Fallen and Envision Yourself Levitating also feature more expansive melodic development in Hutchings’ playing. Amidst all this, Hutchings also finds room and purpose for a sense of fun, levity and some mischief making too, particularly in the exhilarating contribution from D Double E on For The Culture.

Black To The Future is both musically and thematically bold and important. It is a major statement contextualising the present, aiming to better understand the past and, hopefully, providing a provocation for a better future.