Sophia Knapp – Into The Waves 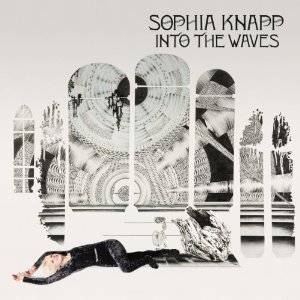 If you’ve heard of Sophia Knapp, it might be from one of her previous musical outfits; either Cliffie Swan or, more likely, Lights. These were, in fact, the same duo, who decided on a name change last year before their third release and who hail from Brooklyn, New York. Their sound was ’70s; reminiscent of Fleetwood Mac and hailed as such in the media they garnered, which admittedly wasn’t much.

Now Sophia Knapp has flown the nest and released her debut solo record, Into the Waves, and once again the Mac references are flying, except this time it’s more about Stevie Nicks. Knapp’s overall sound is, after all, still of the ’70s variety; and her whispery, pleasant voice is reminiscent of Nicks before she belts out a roaring chorus.

That is part of the problem with Into the Waves, however; it’s all very pleasant, but it never quite seems to get going. You find yourself waiting for the softly humming synths to drop, or throb, or something, but they just never do. Knapp’s voice remains, for a good portion of the album, at the same pitch and then, even when her intent changes, you start not to notice. She certainly never channels any of Nicks’ aching sadness or captures the same vibrancy of her witchy chants.

Of course, no one ever said Knapp was out to copy Stevie Nicks, so perhaps she shouldn’t be judged too harshly on her inability to be quite as good. Knapp is certainly aiming for that seventies vibe, though, and it is here that she falls flat where she probably wanted to succeed.

The synths are almost too synthetic; there’s no life in them and looking back, it’s difficult to remember exactly what you were listening to. Knapp’s cobwebby wanderings over the top only serve to thicken the fog of sound, though they certainly don’t deepen it, and it all starts to sound worryingly like lounge music. The addition of Bill Callahan on two of the tracks (Spiderweb and Weeping Willow) should serve to ground the music; but instead, his deep bass sounds out of place and odd in very calm, gentle ocean.

The sound is, overall, very vintage, but it is also dated. What should sound like some soft ’70s disco instead starts to sound like eighties or nineties R’n’B. There is a distinct lack of edge to any of the tracks and even the highlights of the album are only highlights because they show a slight change in tone or variation from the meandering emotions present elsewhere.

Opening track Glasses High reminds of Harry Nilsson’s Everybody’s Talkin’, with its hints of country blues and vocals that sound like Dolly Parton. It’s actually a very sweet song; but again, it still sounds dated, and it’s never going to be a song that breaks the Top 40.

In the end, the main problem with Sophia Knapp’s debut is that it leaves no lasting impression. By the end of the record, you’re already thinking of what you’d like to listen to next – something with a bit more bite. There’s no depth to the music; nothing to inspire you to go back for more. While it’s quite pleasant and occasionally curious at first, the novelty wears off.