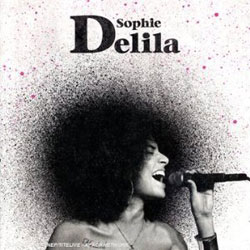 In this era of The X-Factor pop idols, raised to superstardom by cocky, we-know-music industry judges, it comes as a surprise that Sophie Delila had to wait for over a year and a half to see her debut album released in the UK.

The London-based French singer-songwriter has big hair and a voice to match that could rival Corinne Bailey Rae, Adele or Amy Winehouse. Hooked was originally released in November 2008 in her native land, and a cult following soon ensued in her adoptive country. She was last seen on vocal duties with Nouvelle Vague for a few tracks on their album and a tour, gingerly hooking fans and industry interest.

Co-written and co-produced with Steve Booker, who shaped sounds for Duffy, Sugababes and Natalie Imbruglia, Hooked easily glides into the new soul movement. It borders on Motown, from its classic era to today’s take on the genre. It is chock full of melodies and rich harmonies, as opener State Of The Crime attests.

The title track is clearly anchored in the ’60s, carrying the influence of Motown and its golden era of The Supremes as well as funk, which permeate through most of the tracks. The end of the upbeat This Town even strikes a few Beatlesque chords. The Fab Four was one of the bands Delila grew up listening to in her musician parents’ home. Hey Mister channels a bit more R&B; Alicia Keys has clearly left a mark on Delila, who is nevertheless cautious enough to keep her influences at arm’s length.

Violin and piano reign supreme, punctuating each track with the emotional key that is crucial to convey the themes so prevalent in Motown: love and relationships gone amiss. Yet synthetic sounds also pop up here and there. On the new wave-ish Betterside, synth replaces the duo, while Spirit starts off with a jazzing synth before re-emerging as ’90s soul. But it’s the castanets on In The Morning that really get the groove on.

Delila’s delivery is confident and stylish – she graduated from the prestigious Berklee College of Music – oscillating between soulful and funky and hitting a few blue notes from time to time. The refined anthem Another World would be a hit with talent show judges; her notes soar “somewhere high above the clouds.”