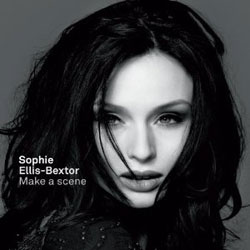 People are generally surprised when they realise how long Sophie Ellis-Bextor has been part of the UK pop consciousness. It is a full 10 years since she committed Murder On The Dancefloor, and in that time she has not managed to kill the groove.

She refers to the song, arguably her biggest hit outside of the Groovejet guest vocal, on the opening track of Make A Scene. There is no wistfulness, the line delivered with characteristic deadpan, but it does invite the listener to draw conclusions on what Ellis-Bextor has achieved in the last decade.

The polite answer is that she has continued to make solid pop songs, that her voice remains instantly recognisable, and that many of her songs aspire to pop greatness but fall just short. Even with an array of starry producers in tow for Make A Scene – Cathy Dennis, Calvin Harris and Armin van Buuren all contribute to a song each – that feeling remains inescapable.

That is the case here, though while working your way through Make A Scene, you might think the time for change has arrived. There is not much wrong with the album, it has to be said, but the feeling of routine on songs like Homewrecker and Under Your Touch is difficult to avoid. The vocals are present and correct, the production is slicker than a Rolls Royce coming out of the garage, but still Ellis-Bextor and her songs remain beyond arm’s reach.

With a cat-like grace she walks her way through the potential singles, of which Heartbreak (Make Me A Dancer) is the best, while Make A Scene, a collaboration with Metronomy‘s Joseph Mount, is a close second, the cool verse pumped up to reveal a more trancey chorus that works really well. Synchronized is also a good song, a bit more stately in its demeanour, while the closer Cut Straight To The Heart, co-written with Ed Harcourt and Dimitri Tokovoi, is more sombre and heartfelt.

Yet these above average moments do not mask the fact that throughout this record Ellis-Bextor seems content to operate at a single, medium-fast tempo, her vocals on an emotional plateau.

That the singer appears to have recognised as much herself is revealing, as witnessed in several TV interviews this week. She has promised a far more adventurous fifth studio album, and seems to relish the possibility. So while Make A Scene treads water, it sounds like we should stick around for whatever she does next.