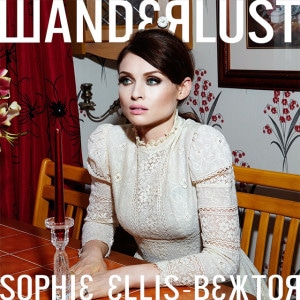 Fresh off the Strictly Come Dancing supertanker, Sophie Ellis-Bextor – she of the razor sharp voice and even sharper cheekbones – releases her fifth studio album, Wanderlust, and it’s a very, very different beast to its predecessor, 2011 effort Make A Scene.

The cut-glass RP tones survive, but not much else does: Wanderlust sees English pop’s premier disco-diva completely shedding Make A Scene’s bouncy electropop – which featured writing and production from the likes of Calvin Harris, Metronomy frontman Joseph Mount and Australian dance act Nervo – and going for something a bit more Radio 2 than Capital FM.

It’s clear right from the off that Wanderlust, co-written and produced by Ed Harcourt, is Ellis-Bextor striking out in a different direction. Opening track Birth Of An Empire shrieks into life with the kind shrill, exotic strings that epic fantasy movies like Prince Of Persia use to announce that they’re set in Ye Olde Middle Eastern Desert, 3000 BC. You just don’t get that with Calvin Harris. It’s a fabulously melodramatic album opener, those borderline-hysterical strings soon joined by pounding piano chords and portentous lyrics – “Can you feel this empire being born?” – and you can sort of forgive it for being a little bit post-1989 Disney soundtrack just because it’s so gloriously unapologetic in its theatricality. If Ellis-Bextor doesn’t get at least one panto offer off the back of this one track, there is something unutterably wrong with British society.

Quite a lot of Wanderlust is suffused in this sort of quasi-musical theatre quality, though without ever quite hitting the heights set by Birth Of An Empire. The synths and disco guitars of Ellis-Bextor’s previous output are replaced by harpsichord-effect keys and school musical-style electric piano chords, and the whole thing is garnished liberally with the kind of soaring strings and wistful vocal lines designed to get five-year-old girls nagging their parents for an overpriced nylon princess costume and a trip to Disneyland. You half expect an enthusiastic but slightly out-of-tune choir of local primary school kids to join in on the choruses, although Operation Yewtree seems to have rendered that sort of thing a bit beyond the pale these days. Imagine all the CRB checks you’d have to sort out.

Piano-based lead single Young Blood is a prime example: Ellis-Bextor’s vocals are beautifully subdued, as always – no Aguilera caterwauling for our Sophie – but together with the trickling piano lines and muted drums, it’s all a bit heroine-gazing-forlornly-into-the-distance. Interlude, Love Is A Camera and Runaway Daydreamer are more of the same, with their shuffling percussion and fairytale lyrics about “a landscape held in time under the ice”. You’d have to have a heart of cold, igneous rock not to enjoy these tracks just a little, but if you were never a member of your local youth theatre company the sticky-sweetness of it all quickly becomes cloying.

When Wanderlust does veer away from its luvvie leanings, the results are more optimistic; there’s a sense that somewhere in all the greasepaint and glitter there’s a decent, more mature album trying to get out. 13 Little Dolls rips along in a squall of guitars and thundering drums, while Cry To The Beat Of The Band just about survives a slightly Les Miserables-esque verse to reach a big, crunchy old anthem of a chorus. It’s just a shame that there’s so much indie-SuBo to wade through in between these moments of hope.

It’s always good to see an artist experimenting with sounds and genres that their audience wouldn’t associate with them, but in the case of Wanderlust, Sophie Ellis-Bextor has just abandoned her electropop comfort blanket for a smothering duvet of clichés and ineffectual romanticism. Bring back Freemasons, please.