SOPHIE – Oil Of Every Pearl’s Un-Insides 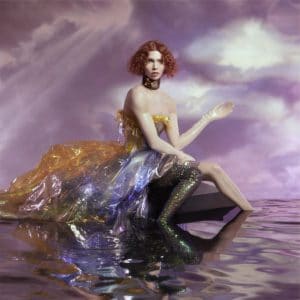 In pop music, it is a tried and tested recipe for success to write lyrics that are specific enough to pull the listener in but vague enough to feel universal. This formula has served the likes of Max Martin, Rodney Jerkins and Brian Higgins very well over the years, but the fascinating thing about pop ballad It’s Okay To Cry, lead single and first track on Oil Of Every Pearl’s Un-Insides, is that Los Angeles-based Scottish producer, singer, songwriter and DJ SOPHIE seems to take the opposite approach. The story being told is very specific, but has intriguing gaps: who is this person to SOPHIE, what was on the page of the magazine they were reading?

In a microcosm, this represents the subversion of popular music norms that runs through her debut album. Influences from trap, EDM, bubblegum pop and musique concrete float around in a mutated form that is utterly characteristic of SOPHIE’s production style, and the common discourses around pop music being ‘fake’ are chewed up and spit out by an album that wilfully plays with notions of reality and artifice, most notably on Faceshopping and Immaterial.

The latter is the record’s most upbeat song, featuring a bassline that bounces around infectiously without a kickdrum to anchor it and lyrics about being inhuman, unreal (“without my legs or my hair / without my genes or my blood / with no name and with no type of story / where do I live? Tell me, where do I exist?”). The buildup stretches the vocal pitches to squealing extremes, the hook stutters around a phrase referencing both the Madonna song Material Girl and SOPHIE’s interest in transhumanism, the result is the closest she’s come to ‘pure’ pop since Just Like We Never Said Goodbye.

Infatuation is the R&B slow jam of the album, with filtered piano, light percussion from what sounds like a circuit bent 808 and slow, fluid bass notes that grow in intensity until they start pressing against the song’s confines. Halfway through the track an element introduces itself that has the aesthetic quality of an electric guitar solo, but is in fact a glitched out piece of granular synthesis, and the track’s hook (“infatuation / who are you deep down?”) builds from a whisper to a shout in what is an immediately arresting, bittersweet album highlight.

As is to be expected given her producer chops, the sound design is often extremely intricate, whether it be the text painting of Ponyboy’s verses, the frantic rave stabs of abrasive interlude Not Okay or the gradual disintegration of Whole New World / Pretend World. However, this album also sees Sophie explore more minimal ideas like the slow builds of Is It Cold In The Water? and the cavernous Pretending which advances with the speed and magnitude of Anish Kapoor’s paint train. The variety makes the album feel significantly bigger than its 39-minute runtime, and allows her to fully realise the potential she demonstrated on 2015’s mixtape Product.

When It’s Okay To Cry was released in October last year, along with a music video that showed her face for the first time, there was a palpable sense that SOPHIE’s career had entered a new era. The name SOPHIE, which had previously seemed like an enigmatic in-joke, took on new meaning and the music was more explicitly personal. Oil Of Every Pearl’s Un-Insides does not remove all mystery, but is a powerful statement of identity, a shattering of traditional genre boundaries and nuanced, moving expressions of emotion where there once was an inscrutable deadpan. The fact that it all sounds so irresistibly good is the icing on the cake.