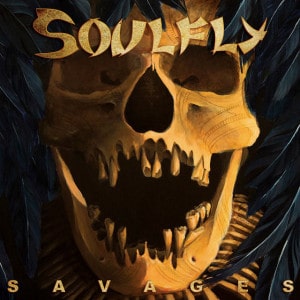 Everything about this album reeks of effort. There’s a lengthy press release, making a point of saying that guitarist Marc Rizzo has been in Soulfly longer than Max Cavalera was in Sepultura (rather glossing over the fact that the latter band produced Arise, Chaos AD, and Roots in much less time). Songs on Savages mostly clock in at five to eight minutes, exploring a wide variety of metal styles well beyond Soulfly’s traditional tribal groove – an eclecticism further bolstered by the handful of guest vocals sprayed over the album like an uncovered chesty cough.

Which all comes as a bit of a surprise, as Soulfly’s latest gigs have been marked by a certain sloppiness – Max barely bothering to touch his guitar, allowing his 20 year old son Zyon to learn drums on the job, and – like the cast of Grease – generally letting Rizzo hold the show together (his technical prowess is evident throughout this album). But in the studio at least, the drums are solid enough to suggest an HR policy more forward thinking than nepotistic, and Max’s dinosaur-at-war vocals roar out with undiminished power.

Max also claimed to have whittled down the riffs from a pool of over a thousand – which, considering some of the lesser ones on Savages, must have included some real stinkers. Metallica used to summarily reject perfectly decent but uninspiring riffs as “stock”, a policy that would have eliminated Spiral in its entirety. The best moment is found in the chorus of Master Of Savagery – it’s a great riff, and it was also a great riff when The Prodigy put it in Their Law 20 years ago.

The best moments come with the guest appearances – not because they feature artists in any way superior to Max, but because they provide a counterpoint to his somewhat one-dimensional vocal approach. Neil Fallon of Clutch adds spoken word spookiness and a muscular melody to Ayotollah Of Rock ‘N’ Rolla, to the timely accompaniment of the album’s grooviest guitar parts. Napalm Death‘s Mitch Harris adds low-end grunt to KCS, and Jamie Hanks of I Declare War adds a deathcore edge to Fallen, its technical atonal riffs inspired by latter-day Machine Head.

The exception to the rule is the Bloodshed, a mid-paced chugger featuring punk vocals from Max’s son Igor that sound more like a teenager’s spirited bedroom rendition than a professional performance, and do little more than make the appalling lyrics (“Downstroy the weak minds… ravage skullduggery”) that little bit clearer. Max has explained that he likes “single words that sound powerful” – hence Roots, Savages, Bloodshed, Spiral, and so on. But this is the shortcut of the lazy writer, that puts sounding meaningful over actually being meaningful. It’s good enough for re-branding an oil company, but for supposedly politicised lyrics, it just won’t do.

All of which makes for decidedly mixed results – but also, a sense of light at the end of the tunnel. With a growing sense that it is too late for a reunion of the classic Sepultura line-up, Max needs to find the formula to make Soulfly more than an extended coda to his career – and on the evidence here, an album of elder-statesman-with-young-pretender collaborations (think Tom Jones but hairier and Brazilian) could be the only way forward. Because without it, Soulfly run the danger of becoming no more than what your friends think metal is – a man grunting over noisy riffs.