South – From Here On In 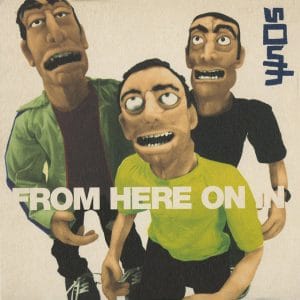 It does this simply because it rocks – and bleeps a bit too. The myriad influences at work on Joel Cadbury, Jamie McDonald and Brett Shaw have this album floating off stratospherically even before the end of the instrumental introduction track, Broken Head I.

You might feel the urge to categorise South as a guitar band, but you’d be missing the point if you did. Beats and keyboards make up at least half of what’s on offer here, with a surprising amount of instrumental tracks, many incendiary, breaking up the more Stone Roses-esque vocalised songs.

There is an unmistakable Manchester beat to this album, calling to mind Ian Brown, Oasis and even Black Grape in places, yet it also finds space for beat frolics, these perhaps being the influence of UNKLE. During the recording of From Here On In the band took time to collaborate with UNKLE on the soundtrack of the new Ben Kingsley/Ray Winstone film Sexy Beast.

It is a lengthy album, at over 90 minutes and with 16 tracks, but there are two versions of All In For Nothing and three Broken Heads, suggesting a somewhat immature lack of decisiveness on the part of the band about which versions were the best. But this can be forgiven – the band are all the grand old age of 22. The paranoid instrumental wig-out that completes Sight Of Me sounds like it comes from the depths of a far more mature band. This track – and several others – build and build until you really can’t prevent your feet from tapping.

Produced by Mo’Wax boss James Lavelle, From Here On In is the kind of album that sounds great on first listen – but then just gets better and better.

More on South
South – Adventures In The Underground, Journey To The Stars
South – With The Tides
South – From Here On In