Sparks – Exotic Creatures Of The Deep

by Darren Harvey
published: 19 May 2008 in Album Reviews
Tweet 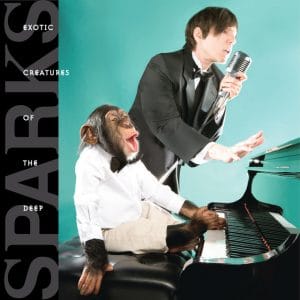 Sparks, with their perpetual air of the unsung hero, are one of those bands with such a copious (and neglected) back catalogue that it becomes the reviewer’s duty to mention just how many albums they’ve released in the very first paragraph of the review. So then: this is album number 21 of an insanely long career. You wouldn’t believe it though: after 37 years, Sparks still sound as fresh, relevant and playful as ever.

In many ways Exotic Creatures of the Deep is a natural extension of the Mael brothers’ creative rebirth beginning with 2003’s Lil’ Beethoven and 2006’s Hello Young Lovers. Those albums combined Ron’s synthesised orchestral arrangements with repeated lyrical motifs delivered by an army of multi-tracked Russells, pretty much perfecting the blend of electro-pop and operetta which they’ve been putting out in various forms since the early ’70s.

Their recent output has seen them at their lyrical peak too; delivering regular belly laughs but with a depth and thoughtfulness that saves them from the novelty bin.

All of those elements are present and correct here. First single Good Morning is Sparks at their very very best; Russell playing the ageing lothario recalling what is sure to be the last one-night stand of his life, accompanied by Ron’s catchiest keyboard riff in years. The vaudevillian chorus reminds us that no-one does hilarity and pathos in quite the same way: “Thank you God, for something rare as this / What surely must have been a holy night of bliss / Gratitude, for having thought of me / I know your time is tight and yet you thought of me.”

Don’t be put off by the fact that it’s made the Radio 2 daytime playlist: it’s so good that even Daily Mail readers from Tunbridge Wells must hear it. Plus its creepiness is sure to shake them up a bit.

Just as enjoyable is Lighten Up, Morrissey (a title that would justify buying the album on its own), which replays that marvellous Sparks trick of taking a very silly idea and pushing it as far at it will possibly go. Again Russell’s unlucky in love, this time because his girlfriend is withholding sexual favours purely because our hero can never match up to Mozza’s standards of intellectualism, diet or quiffdom. “She won‘t dine out with a murderer, pass the salt” indeed.

There’s plenty more to love on Exotic Creatures of the Deep. Like 2006’s Dick Around, Likeable freewheels generously around all of the genres covered in the Sparks canon; and This Is The Renaissance takes its title very literally indeed by documenting the goings-on in 15th century Europe with a campy Mozart accompaniment and Russell’s familiar operatic falsetto.

Admittedly, Sparks have set the bar ridiculously high with their last two albums; but elsewhere Exotic Creatures falls a little short of recent glories. I Can’t Believe That You Would Fall For All The Crap In This Song and Let The Monkey Drive are a lot of fun – perky, funny and glammy – but rely a little too heavily on repetition, not quite sticking in the head in quite the same way as the equally repetitive but far more substantial tracks which made up much of the previous two albums. A couple of songs – though only a couple, mind – feel like filler.

As a whole the album doesn’t fully cohere, musically or thematically – but that’s not a hangable offence; and again it may be unfair to compare this with the fully-formed, immersive worlds which Lil’ Beethoven and Hello Young Lovers created for the listener.

Exotic Creatures of the Deep is a substantial, if inconsistent treat. Even when they’re treading water Sparks still cut it better than most bands half their age.