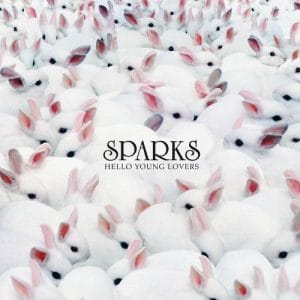 Following fast on the heels of 2004’s ‘Lil Beethoven comes the Mael brothers’ Hello Young Lovers. Ushering in yet another bout of touring for Sparks, pop’s most enduring band of siblings have unleashed a further set of neo-operatic, almost-classical post-modern musings on the social mores and manners of contemporary high society and those who would aspire to it.

Despite their LA roots, the campy high/low art textures remain fixedly eurocentric as ever, a meta-pop act that never felt the trad pull of a visceral middle ground. The quandary of Rock, Rock Rock examines this marginalisation, where the Maels acknowledge that “soft passages / they get you into trouble / they imply a lack of passion and commitment”. The promise to “rock, rock, rock” is reiterated with Wagnerian emphasis, with tongue lodged firmly in cheek.

And wry pomp is very much the order of the day on Hello Young Lovers. Back in the days of Kimono My House and A Woofer In Tweeter’s Clothing, bountifully-coiffuered Russell and the Fuehrer-esque Ron blew open an anterior from the arty fringes directly into the charts.

Sardonic and grand, yet arty in a manner guaranteed to ingratiate themselves with a European audience, they nonetheless left a slipstream for a much more commercially successful group to dominate trading on the more pantomime aspects of Sparksy flow, despite lacking the Maels’ deftness of touch or covert subversion of bubblegum.

Unfortunately, the histrionics of Queen are now so indelibly impinged on the public consciousness that there are certain unfortunate instances of Hello Young Lovers where the once-inescapable bludgeoning of Freddie and the boys are brought painfully to mind rather than the intended references to Lord Philip of Glass.

There’s No Such Thing As Aliens and Here Kitty may be ripe with imagistic wit, but compared to the freewheeling bounce of a Sparks classic like Tryouts For The Human Race they never really rise above cutesy straplining. That said, the stately procession of Waterproof into pogo riffing is perfect audio accompaniment to the urban anomie and drizzly metaphors of Rene Magritte’s Golconde, and is one of the few times when this album’s ambitions are fully realised.

The record’s centrepiece though, is an amusing take on the arrogance of enforced democracy in (Baby, Baby) Can I Invade Your Country, a world where the “need for enjoyment / of rapid deployment” has the banality of evergreen quizzers of the “what’s your favourite colour” and “what’s your favourite Beatle” variety. Topped off with luminous brass flourishes buffeted by the clean rhythm of electro-acoustic guitar, (Baby, Baby) Can I Invade Your Country succeeds by rhythmic glide as well as intellectual conceit.

Sparks have always been smart, but this level of knowingness isn’t everybody’s cup of Barthes. They may claim that “chicks dig dig d-i-g dig dig metaphors” (Metaphor), but Hello Young Lovers has just a little too much theory for comfort.

Though press blurbs are claiming greater accessibility this time around, casual and smartly-attired passers-by alike may find little to separate this excursion into meta-pop from the last. For maximum enjoyment though, its best to listen to Hello Young Lovers by pretending that Bohemian Rhapsody never existed. And when you’ve finished, please let us know how you did it.