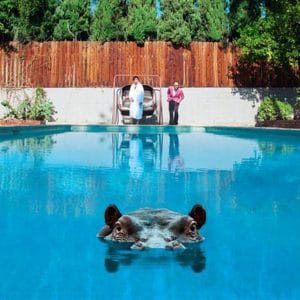 After the brilliantly orchestrated concept-pop of Lil’ Beethoven (2002), and the assorted delights of Hello Young Lovers four years later, Sparks seemed to be treading water a little with 2008’s Exotic Creatures Of The Deep, a little over-reliant on the same tricks of repetition as …Beethoven, but with far less poise and wit. There hasn’t been a ‘proper’ Sparks album – a “pop album”, as Ron puts it – since, with Ron and Russell Mael’s focus pulled by filmic pursuits – the song-cycle The Seduction of Ingmar Bergman and the early stages of a film musical project with Leos Carax – and the arch, angular Franz Ferdinand collaboration, FFS.

Those diversions seem to have reinvigorated the Maels though, and Hippopotamus feels not only like the most “pop”, but also the most Sparks album they’ve released in years. There’s the sleeve – a perfect fit next to the imperial-phase likes of Indiscreet and Propaganda. Or the song titles, which suggest there’s still plenty of pages to go in the Big Book of Potential Sparks Song Titles (surprisingly, it’s taken until their 23rd album to use So Tell Me Mrs Lincoln Aside From That How Was The Play?). And musically, it’s a varied and immensely satisfying set, picking elements from their different eras – from oddball, articulate rock, through synthpop, to opera – and tossing them nonchalantly together – adding a smattering of drum’n’bass (Giddy, Giddy) and cool, flatpacked Europop (Scandinavian Design) – like the assortment of objects floating in the pool of the title track.

A gleefully silly exercise in surreal wordplay, that song might have one of the album’s best musical jokes – wrapping the words “a painting by Hieronymous, Bosch/by Hieronymous” in an ungainly fashion around a line, forcing a rhyme with “Hippopotamus” and “a book by Anonymous” – but it’s in good company. Missionary Position is a charming, risqué defence of vanilla bedroom capers, while When You’re A French Director reels Carax and his accordion in for a tongue-in-cheek bal-musette ode to the auteur (“What does that mean?/Every scene must be obscure as hell”).

But there’s meaning lurking amid all the humour – Probably Nothing is short, sweet and sad, dealing with old age and memory loss (“Something to tell you, but now I forget…”, “Happens a lot lately, I feel so dumb”), while the dreamy, Brian Eno-circa-…Warm Jets-ish Unaware bemoans the crassness of a celebrity and consumer-fixated vie moderne (“Taylor Swift has something new, Nike has a brand new shoe”), envying a child’s blissful ignorance. And the brilliant Edith Piaf (Said It Better Than Me) is a wistful take on Lucille Ball’s line about regretting the things we haven’t done, rather than the things we have: “There were no smoky dives… no petty crimes… Je Ne Regrette Rien/Pretty song, but not intended for me”.

Finally, the comedy is balanced with tragedy by the magnificent melodrama of Life With The Macbeths, where Russell – whose voice, at 68, soars as much as ever – duets with opera singer Rebecca Sjöwall, reimagining The Scottish Play as a death-of-the-week TV ratings-grabber (“Is there a deeper story/Or is it only gory?”).

While not every song is as successful – Mrs Lincoln… doesn’t make quite enough of a very old joke (compared to, say, …Beethoven’s How Do I Get to Carnegie Hall?), and A Little Bit Like Fun is a little bit slight – these are trifles; Hippopotamus is a big, joyous beast of an album.