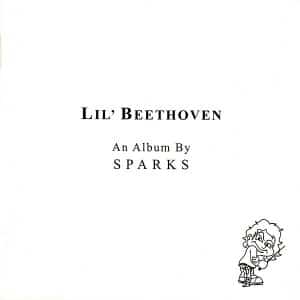 Aah, Ludwig. Who are those two freaky looking friends of yours? Especially that one with the moustache that only Eva Braun could love? And then the other one; he looks a bit like that singer from that ’70s band who used to twitch around the Top Of The Pops set, yodelling like Jim Morrison with his chap caught in his zipper. What were they called again? Oh, Sparks? Oh, it is them? Okay, goodbye Ludwig.

Ron and Russel Mael’s Lil’ Beethoven project is given a ‘deluxe’ edition re-pressing after a rather confused and protracted launch last year. Should it ever be granted such a thing as mainstream airplay, Lil’ Beethoven might even give the brothers a commercial hit. However, it would be wrong to deduce from this that Lil’ Beethoven panders to any current pop sensibility. Rather, it attempts to construct an international Art-Pop with orchestral textures, and wants to be loved for making the effort. For the most part, it succeeds.

When it does work Lil’ Beethoven demonstrates a decidedly suburban wit and intelligence not seen in mainstream pop since the Pet Shop Boys‘ hit-making period. There’s no re-filtered Hi-NRG here though. As the Maels explain on The Rhythm Thief, it’s time “to say goodbye to the beat” and furthermore, its “lights out, Ibiza”. In its place are towering but strangely frisky Philip Glass-like strings that permeate the irresistible I Married Myself and My Baby’s Taking Me Home.

With an ostensible “nine scintillating works of seduction and self-delusion”, the Mael brothers cover a lot of ground. Relying on repetitive phrasing, Sparks hammer home some velvet-gloved punchlines. Suburban Homeboy is an inspired send-up of that modern phenomenon – the slumming-it cultural dilettante whose caddy “looks just like Jay-Z” and whose “ho’ is “a freak bitch from the projects in St Tropez”.

Rather than dip in to some ersatz rapping, Suburban Homeboy is delivered in the fugue-like Mael harmonies familiar from Sparks hits of yore. Only Ugly Guys With Beautiful Girls fails to hit home. On paper a bitingly funny, if bitter, satire of upward mobility, the pastoral intro of Ugly Guys is broken by some over-urgent thrash guitar that tends to grate – the only miscalculation on the original set.

Let’s not forget too that this is a deluxe set. With a video, film, and screensaver thrown in, not to mention the glitzy packaging, there’s a lot here to tempt file-sharers away from uploading nirvana. And hey, what’s wrong with good old-fashioned artefacts anyway? For our pleasure, there are also three extra bonus tracks. Wunderbar is a missable echo of Laibach-style chanting, while the instrumental Rhythm Thief is strictly for completists. However, the Ron Mael spoken-word The Legend Of Lil’ Beethoven is a nice explainer for the whole album, and suggests that Lil’ Beethoven is that most maligned of forms, the concept album.

If it is, it’s the best kind of concept album (sadly no Rick Wakeman on ice here). The Mael Brothers examine the flotsam and jetsam of western values through the kaleidoscope eye of Lil’ Beethoven with a lightness of touch that skilfully avoids pomposity and overweening moralism. And with a keen eye on accessibility, Lil’ Beethoven needn’t be a private pleasure.