Sparks – Made To Measure: A Personal Collection Of Classic Motown Cuts 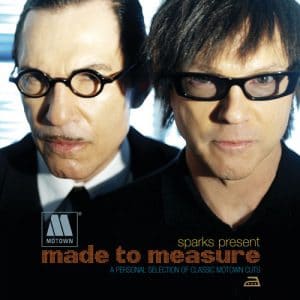 Sparks always used to terrify me and many of my peers in their youth, when they crept onto Top Of The Pops. The Brothers Mael were often compared to the Brothers Grimm in their fairytale spooksterisms. Bouncy singer Russell bounding around like a thing demented singing in a terrifyingly camp (yet dangerous) falsetto while brother Ron stood statue-like behind his keyboards, just staring menacingly with his Hitler moustache looking like the worst childcatcher ever. Thankfully they did make some of the most pop-glorious bonkers rushes of saccharine candy known to man such as The Darkness‘ Justin Hawkins covered glam-stomp of This Town Ain’t Big Enough For Both Of Us.

Now it is their turn to pore over the Motown catalogue to present their own Made To Measure compilation. Quite how they got ‘bumped’ down the list and actor Martin Freeman (The Office), who manned the helm of the first compilation, is beyond most rational folk.

The raw material is of course fantastic, but it does have the danger of slipping into over-familiarity unless given a new context or, in this case, what Motown meant to the two outsiders from Los Angeles. Recognizing that the music coming out of Motown transcended any racial prejudices or categories (and was brilliant in its ingenious simplicity) was something Sparks would try and emulate with their mini-pop symphonies, musical genre-hopping and lyrical suss.

From the moody instrumental opener Cleo’s Back up to the closing Ben from Michael Jackson, there are rich pickings to be had and the hit factor is high as uptempo numbers Dancing In The Street, ABC, Don’t Leave Me This Way nestle comfortably with ballads such as What Becomes of The Broken Hearted.

But dig beyond the familiar tracks there lurk some real gems. The bruised soul of Smiling Faces (“A smile’s just a frown turned upside down”) aches and coos like a lounge version of Basement Jaxx. Gladys Knight has never sounded so damned filthy as on Nitty Gritty, which simmers on the point of explosion and is all the better for not giving in to the urge to collapse into cliché.

Brick House funks along with style and gallons of greasy sleaze. On a similar vibe, The Contours are the bad boys of soul with their tale of lowdown male predatory habits, as they looks beyond physical attributes because “First I look at the purse,” and the beautifully deceptive shuffle of Mary Wells‘ You Beat Me To The Punch, a sweet tale of romantic indecisiveness.

Whether the Mael Brothers stamp of approval will lend these already great tracks any extra credibility is questionable, but for the fact that Motown is opening up its vaults for reinvention is one way to keep these tracks alive. There could have been a whole heap of ‘crate-diggers’ delights unearthed here, but opting for the mostly familiar may provide a way into the occasionally daunting Motown back catalogue, led by the two spooky Sparks turned good. See, everyone does love a happy ending.