Spector – Enjoy It While It Lasts 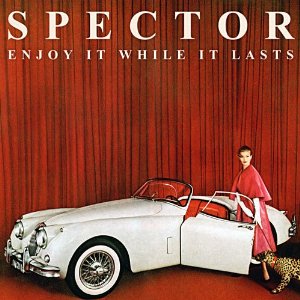 Spector are a band who emerge into the hip-hop and electro dominated landscape of 2012 sounding very much like an anachronism. The quintet, led by indie stalwart and man about town Fred McPherson, must curse their timing. They’re the kind of band who would no doubt have garnered considerable success had they emerged in the mid-noughties guitar boom, but almost a decade later Spector’s sound is in danger of sounding so dated that those massive sales and Brit Award success seem like distant dreams.

Spector were notable as the only group who could be labelled as a ‘traditional’ guitar band to feature in the BBC’s Sound of 2012 poll. Not that it’s a description the band would entirely agree with as they see themselves first and foremost as a pop group making blatantly overt pop music. Something every track on Enjoy It While It Lasts bears out.

The album is punctuated by a number of excellent singles: it’s hard not to be swept away by the pop rush of Chevy Thunder or the Queen style dynamics of the ridiculously overblown Friday Night, Don’t Ever Let It End. A lot of the material here is extremely obvious but just works wonderfully.

It’s obvious that Spector have a great deal of pop nous, but sonically there are some issues. Despite the album bearing the work of six producers, including the legendary Trevor Horn, there is an annoying thinness and sterility to much of the sound. Horn’s work on the horn-filled bombast of Celestine is outstanding, yet other tracks are stymied by awkward rinky-dink synths and a processed automated sound. At no point do they ever really sound like a convincing, powerful guitar band. Songs that are intended to soar (like chugging rocker Twenty Nothing) remain frustratingly earthbound.

Spector have firmly pitched themselves in the lineage of UK groups who combined pop hooks, showmanship and glamour to tremendous effect. Pulp and renowned anglophiles The Killers are two very obvious touchstones. Singer Fred McPherson is a front man who fits perfectly into that image and his magnetic character is all over the album, imbuing the songs with enough personality and charm to carry Spector through the weaker parts of the record. The album highlight is a song that encompasses the real heartfelt commitment of the band and their inclusive qualities. Never Fade Away is a song surely destined to be sung by a massive crowd while random strangers embrace each other. Spector are a band who wants to make anthems and this is an ultimate anthem.

Enjoy It While It Lasts is a debut album that establishes Spector as a guitar pop group who hark back to the both distant and not quite so distant past. They do it with enough great songs to suggest there is still very much a place for pop music made by five guys with guitars.