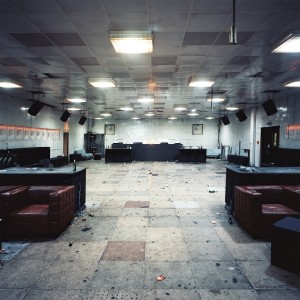 When London five-piece Spector released debut long player Enjoy It While It Lasts in 2012, they were mining a quarry that would have been more timely had it been a decade earlier. Inspired by The Walkmen and The Killers, they had more than a passing resemblance to the latter in particular, their indie guitar rock often focused around the anthemic. But they didn’t seem to know what they wanted or who they really were, only that they enjoyed making pop songs.

Guitarist/keyboard player Chris Burman then departed, so five became four. The remaining members, led by frontman Fred Macpherson, set out to find their identity and what records they actually wanted to make. They’ve also realised that paying attention to third party views of their music matters less and less the longer they exist as a band, which in turn can only release them from any expectations.

The cover of second album Moth Boys was used following its inclusion in a series of photographs from a collection displayed in Germany by artists André Giesemann and Daniel Schulz. It depicts a defunct German nightclub; the series represents ‘the morning after’ and, in comparison to 2012’s effort, it fits the bill for the music on offer.

Tagged the ‘International Man of Misery’ by colleagues, Macpherson has occasionally taken the team in this direction sonically, none more so than for single and album opener All The Sad Young Men, a track that sits head and shoulders above its peers. Various recordings saw it veering between krautrock and Coldplay before settling on something that’s more Editors than anything else, not least for Macpherson’s vocal performance that reminds of Tom Smith. Regardless of how you feel about Editors, it’s a brilliant track; a krautrock beat remains, but the layers of synths and guitars accumulate to create a more serious presence than earlier Spector material, with compelling lyrics like “I don’t wanna make love, I don’t wanna make plans” hinting at how futile life can be.

Don’t Make Me Try has been appearing during live shows for a while now, the upbeat tempo disguising its subject matter, and it’s another winner, this time for its catchiness alongside more added layers of greatness; lyrically, though, the repeated lines of “don’t make me try/cry, not in front of them” won’t win any prizes. Stay High benefits from a foot-tapping core and a soaring chorus despite occasionally cheesy lyrics (“while you stay awesome”, “I let you charge your phone”) – but that’s a little harsh perhaps, as the transformation that the band are clearly going through is markedly noticeable and exciting.

Both Using and West End recall White Lies, the latter deploying more keyboards before reaching another memorable chorus, whilst Believe this time uses tinkly synths to create an ‘80s feel. There are a few missteps, like the uninspiring Cocktail Party – Head Interlude that peters out in drab fashion, but album closer Lately It’s You acts as a microcosm for the entire collection. For three minutes the track plods along uneventfully like another Editors cut given an extra synth presence, but then after a repeated blast of a thrilling guitar riff it veers off into an energetic, bubbly synth explosion.

Spector readily admit they haven’t created a classic with Moth Boys, and are only aiming to create a ‘good’ album. And that’s exactly what they’ve achieved; it’s a step up from Enjoy It While It Lasts but it hints at so much more to come. Let’s hope, then, that this doesn’t put unnecessary pressure on the quartet to deliver something even better next time around; by simply doing their own thing they’re heading in the right direction anyway.