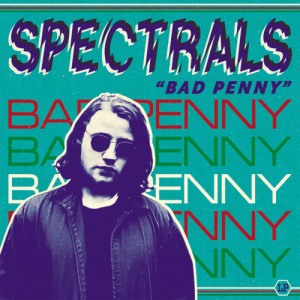 It’s an artistic vehicle with a very clear sense of identity. The same can’t be said of Spectrals and their debut album Bad Penny, with Jones’ quasi-Alex Turner Northern drawl sitting uncomfortably with the frustratingly lightweight attempts at Phil Spector production. It’s the musical equivalent of an identity crisis.

Opener Get A Grip doesn’t bode well for the rest of the album, with the best that can be said being that it would make the perfect background music for a bustling inner-city cocktail bar. The lilting Lockjaw improves matters to a degree with its haunting guitar lines adding a touch of colour that the opening track simply doesn’t possess. Speaking of the opening track, it’s never a great sign when you get to track three, and already hear a song that sounds like track one. In fact, it’s startling just how easily one song segues into another over the entire album.

That’s not to say the album’s totally devoid of merit. Big Baby – despite being more than a little similar to Wild Swans‘ Chocolate Bubblegum – and You Can’t Live On Love Alone might not be earth shattering but are at least a slight improvement to the inconsequential first half of the album. Sadly, once these are dispensed with it’s business as usual with album closers Confetti, Luck Is There To Be Pushed and Brain Freeze all barely registering as they play.

Many who’ve seen the live show will question if this record really is by the same band. Where the live show is arresting, the album is inoffensive and lightweight to the point of blandness and, quite frankly, it’s just plain dull. It contains nothing noteworthy, nothing to grab the listener’s attention, and will have few going back for repeated listens. Quite where Jonesa will venture next remains to be seen, but for now Bad Penny can surely only be seen as a missed opportunity.