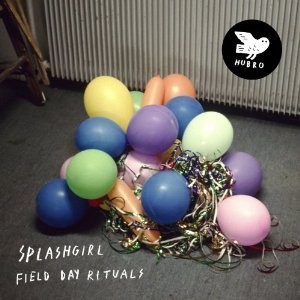 Field Day Rituals is the fourth album by Norwegian jazz trio Splashgirl and it is arguably their best to date, revelling in its restrained slowness and methodical deliberation. It also features a clear narrative progression, with each track appearing to prepare the ground carefully for what is to directly follow. What ensues is a thoroughly immersive listen that, whilst undoubtedly sombre, is also consummate and engaging.

It opens with four pieces that possess a mild ECM feel, albeit darker and more opaque. Opener Long Story sounds not dissimilar to something you might find on a Tord Gustavsen Trio record, the piano playing prominent and graceful but surrounded by deeper, more shaded sounds. All The Vowels Missing meanwhile gives an early indication on how difficult it is to neatly categorise their sound, the grounded piano lines hinting at melodies without ever fully achieving them. It briefly positions them alongside acts like Tape and others found on fellow experimental Scandinavian label Hapna. It also has a beautiful inertness to it, something that contrasts with following track Dulcimer which is propelled by percussion that moves the album into weightier post-jazz territory.

Field Day Rituals arguably has a richer, thicker sound mix than other albums, something demonstrated on stand-out track Mass. Featuring Eyvind Kang on viola and a greater focus on bowed double bass it has a disquieting, slightly anguished eeriness that also manages to project an otherworldly, Middle Eastern feel. It takes the music outside of the realm of jazz into something more mysterious and hard to place. Following track Never Been Anywhere Before is similarly distinctive. A piano line that sounds more closely aligned to classical music emerges out of the mist and grows into something more cinematic and emotionally penetrating. It’s by far the most animated moment on the album.

Another quality that runs through the album is its economy of language. It recalls their earlier work on albums like Arbors and Pressure but here it has a higher resolution to it, certainly in its execution. In this respect it is not unlike what you would find on releases by The Necks. The closing three tracks see a return to the piano-led jazz sound that opened the album, almost as if things have come full circle. The Portal In particular wanders a lonely, melancholy musical path.

Norwegian label Hubro had a quietly successful 2012, releasing pleasingly leftfield albums of a high standard (most notably from Erland Dahlen and 1982/BJ Cole). Field Day Rituals is a worthy addition to their catalogue, consolidating their position and suggesting that 2013 may be a similarly rewarding year.