The Spook School – Dress Up 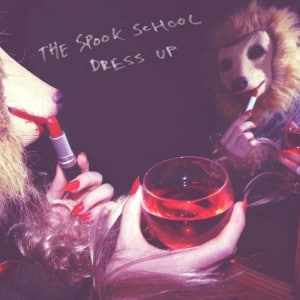 At the turn of the year, indiepop fans were rightfully concerned. The demise of some of the scene’s leading lights – Standard Fare and Shrag – coupled with the fact that there were no new albums on the horizon from its others meant that 2013 looked to be something of a non-event in the world of shouted lyrics, polyester shirts and neatly pressed cardigans. But, luckily for them, indiepop supremos Fortuna POP! had been busy beavering away, nurturing new talent.

Joanna Gruesome‘s first album was a blustering, raucous affair that announced their arrival at the noisier end of the label’s roster. At the opposite end of the scale, Flowers have been making a quieter name for themselves. But Dress Up, the debut album from The Spook School, is the album that many have been waiting for.

The Spook School arrived with a thud during January’s Fortuna POP! curated mini-festival, Winter Sprinter, at north London’s The Lexington. Since then they’ve worked solidly, touring and getting their debut together. And it’s been worth it; Dress Up is as satisfyingly immediate as Tiger Cats‘ Isle Of Dogs, with a fair few layers of intrigue to dissect later on. If you read the ‘personal’ section of their biog, it might not be what you’d expect. Much has been made of guitarist Nye, who identifies as transgender. The band have talked about how their music “explores gender, sexuality and queer issues”, that “gender is something more fluid than the given binary of male/female”… but really it’s mostly just a bit silly.

The Edinburgh quartet are more Buzzcocks than Antony And The Johnsons, with the majority of their debut hurtling along at 110 mph, all bouncey tunes masking deceptively smart lyrics. Take opener Are You Who You Think You Are? “I know who I am and I know what I feel so I have a few problems accepting what is real… And I know it’s going to break your heart…” over two-and-a-half minutes of hyper pogo-pop. Elsewhere, they tackle similar themes of feeling lost on the eventually anthemic I’ll Be Honest.

Vocals are split across the band, who insist they don’t have a ‘front person’, but it’s undeniably Nye’s wobbly, wavering vocals that win out, and Devil Of Mine is a gorgeous, tear jerking change in tempo. But it’s not all so serious. Standout track The Cameraman has a The Cribs-ish hook that nestles itself in your head as soon as it  leaves the speakers. Who You Gonna Call? Goat Buster! is all metallic, jangling guitars that would sound punkish if it weren’t for the more delicate vocals. I Don’t Know looks to youthful insecurities (“I just don’t know how to talk to you”) while That’s When I Ran Away is a racket of an indie disco classic in the making.

Dress Up is the sound of four young people experimenting with music as an outlet for their questions, thoughts and frustrations about gender, identity and growing up, and proving that examining such big subjects needn’t be a daunting experience. On this evidence, the future is safe in The Spook School’s hands.

The Spook School MP3s or CDs

The Spook School on Spotify