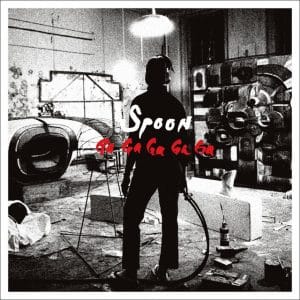 Ten years is a long time to go with very little in the way of recognition, but here are Spoon again showing us why they should be clutched to the hearts of anyone with an ear for a tune.

Britt Daniels is evidently a man with a keen sense of what makes a hit record: he also seems to be well versed in his musical history as many of these songs reach back in time and take their cues from the likes of The Kinks and The Beatles. That said Ga Ga Ga Ga Ga (or Ga… as we’ll know it from now on) is hardly an album that revels in pastiche or parody, these songs are more than capable of standing on their own.

Don’t Make Me a Target opens proceedings with spiky guitars and subtle bass lines. It’s the glorious pounding piano that steals the show though, as it goes a long way to reminding you that the piano is essentially a percussive instrument. Evidently there’s more fun to be had hammering the hell out of a keyboard than there is in tickling it gently and moaning about how your girlfriend left you for the fair trade coffee drinking hippy upstairs.

Things take a quick dip in quality whilst The Ghost of You Lingers flits past your ears, thankfully not lingering too long to out you off the album as a whole. You Got Yr Cherry Bomb livens things up with a cheeky honking horn section, and Britt Daniels exploring his full range. If Motown ever produced an American College Indie band then undoubtedly they would bang out songs like this.

Speaking of American College Rock, Don’t You Evah continues to expose Spoon’s roots in this area. If this song isn’t being played all over American radio I’ll be surprised. Understated, but with an undeniable catchy charm it sounds like the irritatingly gifted love child E from Eels and Pavement‘s Spiral Stairs.

The Underdog stands out as the killer track on the album. Acoustic guitars, handclaps and a horn section that sounds like it could have been lifted from Sgt Pepper mix to create a bouncy little number. It’s the kind of thing Dodgy might have written if they’d been any good.

There are moments of sheer brilliance on Ga… and due to the band keeping things short and sweet (the album clocks in at about 36 minutes) those moments are rarely far apart. If you were going to find fault anywhere you could only really single out the song Finer Feelings. It drifts far too close to the sound of Acid Jazz when Corduroy were at the “peak” of their powers.

Other than that, this is a shining example of Britt Daniels’ songwriting. As they say themselves “you’ve got no fear of the underdog, that’s why you will not survive”, and if Spoon continue to be perennial underdogs then perhaps you should be just a little bit afraid.