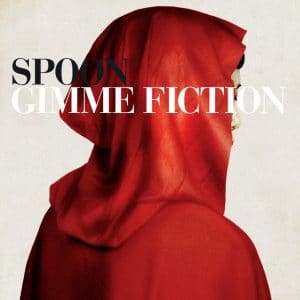 How are you? I hope this letter finds you in good health. Now, I realise it’s been a while since we’ve spoken – I’m not looking to apportion blame, as we all know it was your fault – but I’ve decided to do the honourable thing and get back in contact for serious reasons. I’m writing because this is Spoon’s fifth album release and you don’t appear to have noticed the previous four. In fact, I think it’s fair to say that Britt Daniel and his ever-changing band of friends have made as much impact as a Kilroy-Silk endorsed political party.

And that’s not fair. Put simply, Spoon is good, bordering on great and Gimme Fiction is great, occasionally fantastic. There’s your headline. There’s your summation. Because, surely we’ve all sat through enough tepid, anodyne bands clogging up the musical scene with their barely identifiable dirges to pay a bit of attention when something as quirky, offbeat and enjoyable as this comes along. Which is where you come in. For a small donation to the cause you can purchase this marvellous CD, help save a lesser-known cult band, and assist spreading a little bit of musical joy across the land. Really, how often do you get an opportunity like this?

Reasons? You want reasons? I’ll give you reasons. I’ll give you reasons so good you could paint your house with them: how about The Beast And The Dragon, Adored – Sunny Afternoon by The Kinks being tripped up by Lou Reed and landing smack on the Pavement. Or, how about Two Sides / Monsieur Valentine, a song that you just know has Ziggy-era David Bowie‘s phone number on speed dial, or even the absurdly catchy, hand-clappy, guitar jangle of Sister Jack, which is so good I’m not even going to create a weird analogy to describe it. Yes, that good. And those are just the tip of the enchilada.

My desire to speak to you despite the recent unpleasantness between us should make you see my determination to rectify this situation, and I’m sure there must be a place in your heart for a band producing such skewed, energetic rock’n’roll. Hell, you made Beck a star, so you should have no problem adopting Spoon.

Anyway, if you can see your way to helping me with this I’m sure I can forget all the regrettable incidents that have gone before, I’ll even stop the 3am phone calls and the slanderous anonymous postings to the local newspaper if you like. I could even see fit to returning your card table and strimmer. So, as you can see, it’s a win-win situation, but the ball is most definitely in your court.