Squarepusher – Be Up A Hello 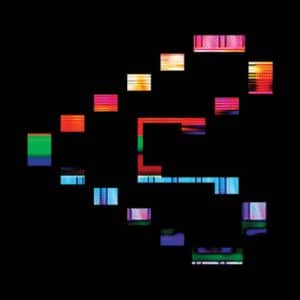 Ever since the beginning of the last decade, Thomas Jenkinson, aka Squarepusher, has been producing in a new way. His sounds are much more digital, with the noodly jazz of Music Is Rotted One Note or 2009’s Just A Souvenir a hundred miles away, and owe more to video game music than the jungle breakbeats that initially inspired him.

The previous Squarepusher record is described as having been “recorded using the system 4.0”, perhaps a software Jenkinson has designed for his productions, but in any case the style is enjoyable and intriguing.

Be Up A Hello opens relatively gently, with the melodious Oberlove dominated by stepwise lines and 808 kickdrums. Things then take a turn for the intense as Hitsonu’s ornate chord sequence is disrupted by a spasmodic synth, and apart from a couple of intermissions most of the record follows this trajectory (as a fair few Squarepusher records do – Go Plastic, Ufabulum).

The most distinctive effect in this soundworld is a synth that is reminiscent of a Roland TB-303, with its busy 16-note loops and acidic quality, digitised and turned inside out. Jenkinson employs this synth on most of the heavier tracks but it’s particularly effective on Speedcrank, which pits it against bustling percussion and twists its virtual knobs as far as they’ll go.

Vortrack features a beat that’s constantly tripping over itself in layers of syncopation, accompanied by another tool in Jenkinson’s arsenal: FM synthesis that pulses and thwacks in a fascinatingly wild fashion. It makes for a nice contrast with the 303 rebuild, the former full and sonorous while the latter is nasal, scattered shards of sound that mingle and collide.

The main weakness of the album is perhaps too much focus on sound design and not enough on songwriting – at times the tracks feel a little hollow and the cumulative effect becomes more exhausting than thrilling. This is all the more reason to appreciate Detroit People Mover, a melancholy ambient number with lush chords and soaring melody, while the desolate rumbles of closing track 80 Ondula are also a refreshing novelty.

Having spent the ’90s and ’00s defining the genre he works in, Squarepusher is now a long way down his own less-trodden path, and as such Be Up A Hello doesn’t sound like much else out there. It’s a well-produced record, even if Ufabulum is a better example of the new style put to good use.