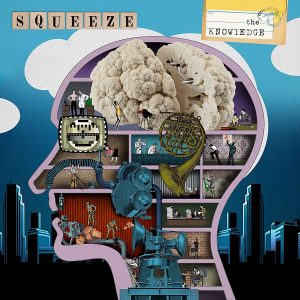 “If you’re a genius it might take you a year. On the other hand it might take you two, or even ten. And if it looks like it’s going to take you longer than that I should chuck it in and take up ballet dancing instead.” – Jack Rosenthal, The Knowledge

“It is tempting to interpret the Knowledge as a uniquely British institution,” wrote New Yorker Jody Rosen in a 2014 piece, rationalising the continued existence of the arduous and 150-year-old Knowledge of London in the age of GPS. “[An] expression of the national passion for order and competence” (23 June 2016 still being some way off in the distance). “But the Knowledge is less a product of the English character than of the torturous London landscape. To be in London is, at least half the time, to have no idea where the hell you are.”

While Squeeze’s 15th album might not directly reference the titular rite, the sense of place, of being part of the “preposterously complex tangle of veins and capillaries” that makes up London is woven through it. To Glenn Tilbrook and Chris Difford, that torturous landscape is home, and they’re on hand to guide us through it, whether the stops along the way are physical – “By the river bend in the city/that’s where I call home” (Every Story) – temporal, or emotional.

Only the band’s second album of new material in almost twenty years, The Knowledge follows 2015’s Cradle to the Grave, a warmly nostalgic set born of a collaboration on Danny Baker’s autobiographical TV series. And while the opening Innocence In Paradise and Patchouli dip a toe in similarly reminiscent waters – the latter’s Proustian evocation of “that day the skies went dark/in Maryon Wilson Park” not being a long way from Up The Junction’s “windy common” (8.9 miles, according to Google Maps) – things change quickly with A&E.

Acutely now, it’s a soulful paean to NHS staff – perhaps inspired by the band’s work with The Lewisham and Greenwich NHS Choir, who appear elsewhere – whose conversational, simplistic even, lyrics (“It wouldn’t hurt so much to give them more/It’s got to be something worth fighting for”) emphasise rather than underserve the obvious inequity at their heart.

Even better, Rough Ride takes aim at the housing crisis – “Affordable housing, an unobtainable dream” – austerity, and the trickle-down delusion (“Seagulls follow the trawler/…they think sardines will be thrown into the sea”). It’s a sardonic, funky clash of styles, putting an operatic vocal intoning “No such thing as society!” next door to the NHS choir-backed chorus, a Lionel Bart-ian children’s choir and a soulful chant demanding “Austerity/Is that all you have to give to me?”. Elsewhere, Final Score tackles the stories of abuse of young footballers with an apt sensitivity, and only The Ones, decrying “fake news” but lacking specificity, falters slightly – it’s beautifully arranged, though, like much here, featuring one of Tilbrook’s stunning, always musical and never overlong, guitar solos.

There’s a conflict running through the songs here, between the temptation to wallow in the past – like Albatross’s ageing record collector – and their characters’ realisation that they’re not getting any younger. The wistful Departure Lounge is peopled with “Old boys,” who “can feel gravity calling from beneath us”, while Please Be Upstanding tackles a more intimate age-related issue; the buoyant Two Forks, meanwhile, closes the set with a celebration of Difford and Tilbrook’s rekindled partnership (“Our tastes are so different/We’re so far apart/But we’re joined together/Have been from the start”).

In the face of this conflict, the only other option is to face up to the now, with all the problems and issues that go with it, and the album is at its best when it does just that. It’d be all too easy for Squeeze to carry on as fully-fledged ‘heritage act’, trotting out Tempted, Cool For Cats and Labelled With Love to gradually fading returns, but on the strength of Cradle To The Grave and The Knowledge, that’s a route that doesn’t currently interest our genial guides. “It’s time now to wade in/So let us give thanks,” they sing at the end of Two Forks. “I’m grateful for knowing/One day we’ll look back”.

More on Squeeze
Squeeze – The Knowledge
Squeeze – Cradle To The Grave