by John Murphy
published: 12 May 2021 in Album Reviews
Tweet 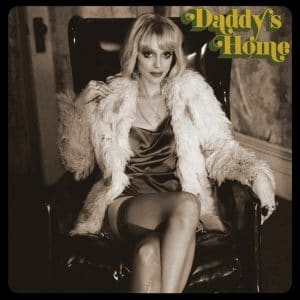 For someone who so lovingly constructs a different persona every time she releases a new album, Annie Clark has never been afraid to shy away from the more personal details of her life. Her last St Vincent album, MASSEDUCTION, drew inspiration from her relationship with supermodel Cara Delevingne (and her resulting tabloid fame) while 2011’s Strange Mercy touched upon a bout of depression she’d experienced.

Daddy’s Home, as the album’s pre-publicity has not shied away from informing us, takes its title from Clark’s father who was sentenced to 12 years in prison in 2010 for his role in a multi-million dollar fraud scheme, and released at the end of 2019. Don’t expect any explicit mention of this though – in the way that St Vincent does best, most of the lyrical allusions are obtuse and cloaked in mystery.

Musically, Daddy’s Home is a bit of an about-turn from MASSEDUCTION. Whereas her 2017 album was full of big, bright pop tunes and heartfelt ballads, there’s a more languid, laid back atmosphere on her latest. The much trumpeted ’70s New York influence is certainly present – there’s an air of grimy funk to opening track Pay Your Way In Pain – but also, more surprisingly, a couple of nods to Pink Floyd in the dreamy The Laughing Man or Clark’s epic guitar solo towards the end of Live In The Dream (Dark Side Of The Moon is also namechecked in The Melting Of The Sun).

Jack Antonoff is still on production duties, but he’s turned down the more day-glo musical qualities of MASSEDUCTION. Down And Out Downtown sounds like a widescreen version of her debut, complete with wah-wah guitar and mention of recurring character Johnny. Somebody Like Me is quiet and meditative, while Down is a slice of deliriously addictive disco-funk in the mould of one of Clark’s long-term influences, Prince. Tellingly, The Melting Of The Sun gives shout-outs to Joni Mitchell, Nina Simone and Tori Amos, among others – a tribute to single-minded women who refused to sacrifice their principles for artistic success.

As well as the Daddy of the title, there are various allusions to parenthood and children. Pay Your Way In Pain talks of snooty mothers at a park (“The mothers saw my heels, they said I wasn’t welcome”), while the title track, a glorious pastiche of ’70s soul, is the one song to explicitly address her father’s imprisonment – “I signed autographs in the visitation room, waiting for you the last time, inmate 502” runs the opening line.

Then there’s the most accessible track, My Baby Wants A Baby, which takes the melody of Sheena Easton‘s 9 To 5 (that song’s writer Florrie Palmer receives a credit) and imagines how she could possibly be a parent when she wants to “play guitar all day” and lives off microwave meals. Like the best of St Vincent’s work, it’s a song that will live in your head for days afterwards.

Daddy’s Home may lack the more exhilarating, guitar-shredding moments of some of Clark’s earlier work, but it’s possibly her best, most considered album to date. Six albums into her career, St Vincent is arguably becoming the defining artist of her generation.