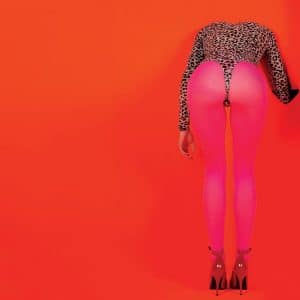 St Vincent‘s fith album comes with a pretty high degree of expectation. 2015’s self-titled record was a career high, full of inventive, thrilling and accessible songs that had Annie Clark’s unique personality stamped all over them. Given it was her best record to date, the arrival of MASSEDUCTION begs the question – can she raise the bar even higher?

From the first note of Hang On Me, it’s clear that Clark has not only raised the bar but moved it several notches up. MASSEDUCTION is a remarkable record, a certain contender for album of the year and demonstrable proof that Clark is an artist working at the height of her powers. The fact that she’s trailed it as her most personal album to date also means that some of the slight emotional reserve that was present in her previous work has been removed.

When Clarke described this as her most personal, she wasn’t kidding. There are songs musing on mortality, allusions to suicide and drugs – yet every track, even at its most deeply sad, is incredibly uplifting. It could be the bursts of shredded guitar that explode without warning (on this album, Clark cements her place as one of the most exciting guitarists working today) or the gorgeous melodies she comes up with, but either way, you won’t hear a more sumptuous break-up song than New York all year.

As with all of Clark’s previous material, the level of invention is so high you’re almost on tenterhooks through each song, wondering what’s coming next. Pills is a ridiculously catchy slice of electro-pop built upon a sing-song hook describing the hold that pharmaceuticals have over our everyday life (“pills to wake, pills to sleep, pills to eat, pills to fuck”) with backing vocals by Jenny Lewis and Clark’s ex-partner Cara Delevingne.

There’s also talk of gender fluidity on the electrifying Sugarboy which sees Clark chanting “Boys! I’m a lot like you. Girls! I’m a lot like you” over an exhilarating mesh of fuzzy synths and serrated guitar. Saviour is the sexiest song that Prince never wrote, a slinky, funky number which sees Clark don a number of outfits ranging from a nurse, “a teacher’s little denim skirt” and a policewoman, before coming to the conclusion that “none of this shit fits”. The title track, meanwhile, seems to be an ode to sado-masochism with a chorus of “I can’t turn off what turns me on”.

Like a lot of relationships though, once the lust fades, the sadness kicks in. That sadness is written all over MASSEDUCTION, especially on Happy Birthday Johnny. Here, the titular character (who also featured in Prince Johnny and Marry Me) is down on his luck, living on the street and Clark reminisces about an argument they had in New York, which she seems to blame her fame for the fact he’s now destitute. When she sings “when you get free Johnny, I hope you find peace”, you can almost feel the tremor in her voice.

There’s more darkness on the terrific Young Lover, which tells the tale of an attempted suicide in a bath (“I wish your love was enough”) and Smoking Section flirts with ending the album on a macabre, chilling note with its allusions to suicide – “sometimes I go the edge of my roof, and I think I’ll jump just to punish you”, before concluding “what could be better than love?”

It’s the sort of record where your favourite song could change on each listen – one minute it could be the mightily anthemic Fear The Future, the next it could be Los Ageless, which is part acidic observation about LA, where “the winter never comes” and “mothers milk their young”, and part pining for a lost love with the wonderful line “How could anybody have you and lose you and not lose their mind?”. On other days, it could be the quiet, yearning quality of New York that stands out, an ode to the one who’s “the only motherfucker who can handle me”. Ultimately, it’s an album without any filler, a record where if one track were to be removed it would be to the detriment of its whole.

“It’s not the end, it’s not the end” runs the final line of Smoking Section and we can only hope that’s the truth – for MASSEDUCTION is nothing less than an absolutely towering achievement. A year after we all mourned the loss of creative geniuses like David Bowie and Prince, we should be thankful that one of their spiritual successors in Annie Clark is on fine form.