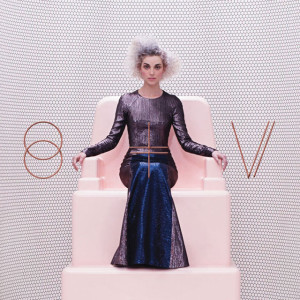 The last time we heard from St Vincent, aka Annie Clark, was in conjunction with former Talking Heads lynchpin, art-pop icon and all-round musical legend David Byrne on their album Love This Giant.

It was a terrific album, albeit one that seemed to be more of a David Byrne record than a St Vincent one. Yet it’s only with the arrival of Clark’s self-titled fourth album that we can see how important Love This Ghost was on the evolution of St Vincent as an artist.

For this is Annie Clark’s crowning glory, the best album of her career to date and surely destined to be one of the finest records of the year. Whether Byrne’s patronage has given her added confidence, or whether it’s the continuation of the jerky rhythms that distinguished that album, it’s clear that Clark has suddenly stepped up a level.

Firstly, the songs are amongst her best yet – on previous albums, there always seemed to be a couple of tracks that seemed to be more promising sketches rather than fully-fledged songs. This time round, all 11 tracks are memorable, addictive and seem to throw up new little elements each time you listen to them. It’s not that she was ever particularly self-indulgent, but there certainly seems a new focus and intent this time around.

Opening track Rattlesnake is a fine example – the distorted, funky rhythms propel the song along beautifully, but it’s only after a few listens you realise she’s singing about being chased naked around the desert by the titular snake. Digital Witness seems to have an improbable amount of instruments packed into it, but still sounds lean and danceable, while she proves to be equally adept at lush ballads like the show-stoppingly lush I Prefer Your Love or the gorgeous closing track Severed Cross Fingers.

Rather like the output of probably her closest comparison, Merrill Garbus of tUnE-yArDs, what’s most impressive is the sheer amount of ideas contained within this album. Huey Newton seems to be floating along beautifully, until it suddenly explodes into a maelstrom of shredded guitars, while Bring Me Your Loves is absolutely outstanding, a taut, rythmic masterpiece that sounds like nothing else on earth and is impossible to remain still to.

In amidst all the sonic invention are some truly startling lyrics. Almost every song contained on St Vincent has a line that makes you sit up and take notice, be it Prince Johnny’s “remember the time we went and snorted the piece of the Berlin Wall that you’d extorted” or Digital Witness’ clever analysis of social media (“people turn the TV on, it looks just like a window…if I can’t show it, you can’t see me, what’s the point of doing anything”). Not only this, but Birth In Reverse probably contains the greatest opening couplet of the year so far: “Oh what an ordinary day, take out the garbage, masturbate.”

It’s an album that manages to remain accessible while still sounding challenging and unconventional, an album that can sound heart-stoppingly beautiful one minute and scratchily acerbic the next and, ultimately, an album that’s impossible to grow bored of. Most of all, this is the sound of a woman at the height of her creative power.