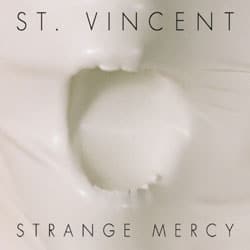 More than just a one-woman band, Annie Clark is pretty much a one-woman genre. Under the moniker of St Vincent, she’s the lone member of the solo-tropical-noisenik-avant-pop club. Merrill Garbus of tUnE-yArDs is allowed in on public holidays of course, but for the most part St Vincent is a truly unique offering.

Hitting her stride with 2009’s Actor, Annie has a history of dishing up slabs of squalling guitar noise interspersed with electronic grooves and hula-hula Hawaiian tunefulness, shifting effortlessly in tempo and between pretty melodies and harsh atonality. Wielding a guitar slightly larger than herself, and surrounded by banks of effects pedals, she’s a captivating live act too.

Like its predecessor, Strange Mercy is a fine album, full of mischievous wrongfooting and audacious juxtapositions of light and dark that would make Caravaggio sit up and take notice.

Eschewing cheap thrills upfront, opener Chloe In The Afternoon kicks off with a cacophony of guitar fuzz and ambient pitching and rolling, before settling on something approaching a melody, audaciously fractured by constantly changing time signatures. There’s no shortage of pop hooks on the album, though – as early as the second track Cruel we get a killer riff, powerful enough throughout to hang the shapeshifting backing onto.

The similarity in concept and sonic texture between this album and its predecessor means that Strange Mercy doesn’t feel like a sizeable step forward; rather a credible re-tread of past glories. But that’s no bad thing: the sonic complexity and inventiveness maintains interest throughout, and no individual element feels recycled.

Annie has always had a neat way with words, and if anything her lyrical skills are sharpened a little here. Her authorial voice is visceral, sexualised, sometimes surreal and resolutely feminist – sharing with Kristin Hersh a literary lineage tracing back to Sylvia Plath and Angela Carter. With lyrics like “I’ve seen America with no clothes on”, “I don’t wanna be a cheerleader no more”, “If I ever meet the dirty policeman who roughed you up”, and “I ate flowers in the back yard” she could be putting Tori Amos out of a job any time soon. Alternately cooing and growling, her voice demands to be paid attention to.

Strange Mercy also rewards repeated listening – never satisfied with a formulaic song structure or predictable chord progression, again Annie has offered us an album full of invention and intrigue, almost impossible to take in all at once. Funk, prog rock, garage, surf pop, Krautrock are all in there – and sometimes all within the same track.

It may not be leaps and bounds ahead of previous St Vincent releases, but this is a rich and multi-faceted album to pay close attention to.