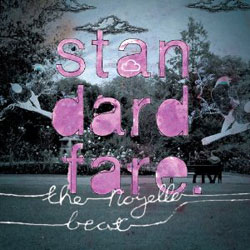 When did music get so serious? From the skirt swooshing rock ‘n’ roll of the ’50s to the unashamedly lusty Undertones and the Charlie Red-tinged hyper-indie of Kenickie, there’s always been a place for hormonal pop music. So why have the kids of the day stopped shouting about wanting to get laid and fancying someone you shouldn’t?

Enter Standard Fare! They might not be fashionable, but this kooky little nugget of indie-pop revival is a welcome slice of dance-till-you-drop, straight up, feel good fun. Hailing from Sheffield, via Buxton and York, the trio’s debut was recorded in just six days, and is released jointly on local labels Melodic and Thee Sheffield Phonographic Corporation, which also released The Long Blondes‘ first single.

The label and home town isn’t the only link – the kitchen sink poetry and endearing honesty of the Blondes’ Someone To Drive You Home is evident throughout The Noyelle Beat. From Fifteen, which tells the tale of singer Emma Kupa’s unfortunate fascination with a 15-year-old boy – “You’re only 15 what was I thinking, lying in your bed, going this isn’t happening…”, to the album’s catchiest track Philadelphia – “Global warming is getting me down, it’s making the sea between us wider and deeper…now I’m going to have to wait a year to see you again in Philadelphia” – the hormones practically slap you in the face.

But she’s not all angsty cougar – Kupa’s an interesting character, with an endearing, unrefined quavering edge to her voice that echos the likes of Orange Juice. She’s half ballsy riot grrrl, half pouty princess, easily switching between the sneeringly wise Wrong Kind Of Trouble, confessional break-up song Let’s Get Back Together and the declaration of love that is Married.

The music, too, flickers between breezey, jangly guitars and a darker, more muted sound – all the while maintaining a deliciously lo-fi feel.

Guitarist Danny How takes a turn on vocals for Edges And Corners which, on the back of the Kupa fronted material, is more forgettable, and sounds like a lost Los Campesinos! b-side. Be Into Us, however, sees Kupa joining him for the chorus and the contrast in their voices makes for a cute mission statement. It’s indie-pop by numbers, and the ever present jangly guitar/whimsical vocals might irritate some, but it’s one of their most immediate songs and a live hook. Along with Secret Little Sweetheart and A Night With A Friend, it offers an insight into what could be if they coupled up more. Kupa sometimes struggles to maintain interest for a couple of songs in a row, while How’s vocals alone are nothing special, but together they’ve got the makings of something electric.

They’ve been doing the rounds of the twee clubs for some time now, so The Noyelle Beat was eagerly awaited in some camps, and those who’ve lapped up their singles won’t be disappointed. Groundbreaking it’s not, but they’ve looked outside the box for their inspiration, and The Noyelle Beat is great record that stands up alongside fellow indie-pop kids The Pains Of Being Pure At Heart and Allo Darlin’.