Stars Of The Lid – And Their Refinement Of The Decline 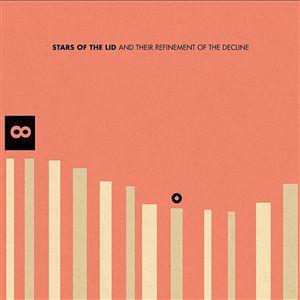 Stars Of The Lid’s new album, And Their Refinement Of the Decline, has been a long time coming. Six years, in fact. 72 months. That makes an average of four months spent on each of the 18 pieces here. The mind boggles.

I’m being rather unfair, of course. The two members of the band, Brian McBride and Adam Wiltzie, live quite far away from each other. When I say ‘quite far’, I don’t mean ’30 minutes in the number 19 bus’. Brian lives in LA, while Adam now resides in Belgium. That’s a separation of around six and a half thousand miles – I should cut them a little slack, perhaps.

Yet six years is still a long time. It’s all the more galling when considering the band’s publishing history. In the six year period from 1995-2001 they released six albums, graduating from the long, languorous pieces of guitar drone and found sound on 1995’s Music For Nitrous Oxide to the long, languorous suites of drones, strings and even brass on 2001’s The Tired Sounds Of. That album, high-fived by all, was a monster: over two hours, 2 CDs; for the purists, 3 LPs. Now, in 2007, we have the new SOTL, and, judging by surface values alone (two hours long, 2 CDs/3 LPs), it’s tempting to refer to it as The Tired Sounds Of, Mark II. It is also one of the most jaw-droppingly beautiful albums that I have heard since its predecessor. If it’s anything, it’s two hours short.

From the opening horn motif of Dungtitled (In A Major) to the final cello tones of December Hunting For Vegetarian Fuckface, SOTL take a ‘if it ain’t broke, don’t fix it’ approach, as much of And Their Refinement Of The Decline is, relatively speaking, not a million miles away from the sound of The Tired Sounds Of. There is still no explicit percussive element to the music, so that rhythm is conveyed by the soft, subtle crescendos played by Wiltzie, McBride and Co.

On this record that company includes cellists, horn players, and, hovering in the background, an entire childrens’ choir, whose use on Even If You’re Never Awake (Deuxi?me) recalls the ‘hidden’ choir in Neptune from Holst’s Planets Suite. Each track evolves under its own steam: nothing is rushed, and the listener is gently coerced away from the melodic expectations of Western music.

This is music that treads a confident path between the immersive experiments in sustained tones of Pauline Oliveros and La Monte Young, and the more elaborate yet still muted works of Gavin Bryars and Harold Budd. Budd’s influence is certainly obvious on a number of tracks, but it’s the warm, radiant Budd of Balthus Bemused By Colour rather than the insular and somewhat distant Budd of The Pearl.

SOTL’s work has never been Music For Airports: it doesn’t work by creating a space like Brian Eno‘s classic album. Yet on And Their Refinement.. – on Apreludes (In C Sharp Major), for example – it could almost be Music For Leaving Airports. The music conjures a nostalgia from even the simplest of melodies which, while they flirt with, never wallow sentimentality. Something like the audio equivalent of the films of Eric Rohmer, then: another artist who understood that the lightest touch can often leave the longest impression.

Although the title obviously causes them to worry about being accused of pretentiousness (resulting in the rather daft track titles), Wiltzie and McBride are indeed ‘composers’, and you could take almost any of the pieces from And Their Refinement and include it in a program of Part, Glass and Reich with ease. Here’s hoping that the next album turns up just a little bit sooner. Or someone moves Belgium six and a half thousand miles west. Whichever’s easiest.

Stars Of The Lid MP3s or CDs

Stars Of The Lid on Spotify