Starsailor – All This Life 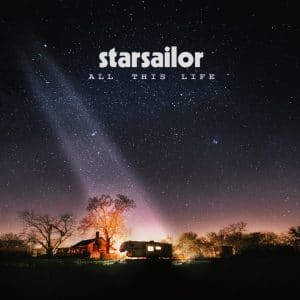 Starsailor are one of those bands critically dismissed out of hand, remembered as nothing particularly special, a bit like Stereophonics or Embrace. It’s easy to scoff, but none of these acts – Stereophonics in particular – would have amassed their sizeable followings had they been entirely dire. Granted, they’ve not been known for releasing music that could be filed under ‘groundbreaking’, and they’re most certainly not to everyone’s taste. But does that matter, if their fans are entertained?

Hailing from Wigan, Starsailor have one of those singles discographies that make you realise you know more of their songs than you consciously realised. Fever, Good Souls, Alcoholic, Silence Is Easy and Four To The Floor could all fall within the ‘oh yes, I remember that but didn’t know who it was’ category, and they’re all in their own terms enjoyable efforts that surfaced across four albums at various points in the noughties.

Singer-songwriter James Walsh has spent some of the past eight years continuing to perform the band’s songs as a solo performer with nothing but a backing track to accompany him on his guitar. Having been quiet as a band since the last album All The Plans, it’s quite a surprise that album number five ever arrived.

Saving the best until, erm, first, lead single and opening track Listen To Your Heart finds the band playing All This Life’s joker a little too early. There are lush strings, and anthemic qualities, with Walsh’s undeniably emotional warblings and a fantastically energising feel adding up to a song that doesn’t burn itself out too soon. After taking a breather, it hammers its message home for a punishing conclusion, exploring relationship chemistry along the way.

The opening track is then followed by singles two and three, a sequencing which amplifies the top-heavy feel of the collection. The title track imitates R.E.M. for a moment before a piano line takes us somewhere else, but it’s all a little average, if still enjoyable. Take A Little Time is another decent effort, particularly with its uplifting chorus, but it’s most memorable for some annoying backing vocals that remind of wedding bands. After the singles, Caught In The Middle appears, a track that will be either loved or hated; it’s as leftfield as the quartet are ever likely to get, struggling to fit alongside the rest of the album as its soul-funk core delivers a curveball moment, being a little too ‘80s cheesey before fleetingly sounding as if they’ve kidnapped Athlete’s keyboard player.

Elsewhere lurk much more satisfying tracks. Blood marries Matthew & The Atlas like backing vocals with strings and lashings of emotion before taking off for a soaring climax, whilst Walsh’s falsetto delights during the smooth, slow-burning Fia (Fuck It All); it’s Starsailor’s best attempt at something in the vein of Tears For Fears’ Woman In Chains, minus the humanitarian rage, although when the title appears during the lyrics towards its conclusion, it does rather stand out like a sore thumb.

Fallout is another track worthy of mention, as sprawling guitars pick the song up by the scruff of its neck to deliver a thunderous conclusion. But possibly the only track to top Listen To Your Heart is the quite magnificent Sunday Best. Beginning subtly, the song then slowly transforms from acoustics and gentle piano into a powerfully emotional juggernaut that makes for a tremendous centrepiece, its anthemic chorus and subsequent gear change providing a nerve tingling sensation that overwhelms.

All This Life won’t win any album of the year awards, nor will it garner much critical praise, but how good it actually is comes as a surprise. It’s all too easy to knock the likes of Starsailor, but with the new album largely reflecting the sound of a rejuvenated band, let’s not write them off just yet.