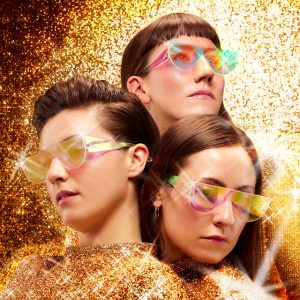 Stealing Sheep’s 2012 debut album, Into The Diamond Sun, was brilliantly eccentric; a folkish experiment with electronics and distinctive three-way harmonies. They’ve continued developing the principles that shaped their early sound – in fact, they’re so developed that this, their third record, could be another band entirely.

Where once they sat firmly in the kooky indie camp, Big Wows sees their landscape shift to a sort of neon, cosmic disco. It’s loud, proud pop music, a kaleidoscope of sounds that looks to the likes of Kraftwerk, Moloko, The Knife and even Robyn for its inspiration.

The tracks that bookend the record reflect this shift in focus. Opener Show Love is clean and crisp, with fresh, trickling synths to launch the album, while closer Heartbeats consists of 40 seconds of subtle, steady, thudding beats, before being joined by warped layers of sound, and then again giving way to the beats as it closes down. These are the songs of a band brimming with confidence, and what lies between is equally sure of itself.

As the title suggests, there’s a mix of optimism or awe and cynicism throughout, and this is perhaps best demonstrated through Joking Me. Packed with thudding synths – the sort that make car door hum – it’s a brilliant club song with a tongue in cheek refrain: “Let’s go out, let’s go dancing” “What?!” “You gotta be joking me!”.

Why Haven’t I sounds like a lost Human League song, while Choose Like You, with its steel drums takes things in a completely different direction. Again.

No matter which path they’re going along, their harmonies feel more present, while the music is more escapist, digging into far away sequences, pulling sounds together to see what happens. The result is a collection that could soundtrack everything from a day basking in a sunny park to a chilly late night tucked up indoors. It was four years in the making, so we can only imagine the contents of the metaphorical cutting room floor.

The band have talked about the challenge of humanising electronic music, and their efforts to do this crop up throughout in the guise of synthetic sighs, gasps and heartbeats; no stone is left unturned in their quest to find humanity in this digital universe. But despite their attempts, Big Wows is highly polished and lacks the intimacy and fragility that made Into Their Diamond Sun such a compelling listen. The pay-off is a more distant but fascinating record that charts their evolution as a band.