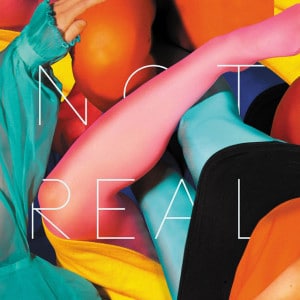 When Stealing Sheep released their album, Into The Diamond Sun, in 2012, they described it as ‘medieval-kraut-folk’. That’s the kind of laborious portmanteau term that often gets thrown at apparently unclassifiable records in an act of unthinking laziness – but in the case of Into The Diamond Sun, it’s about as concise a description as anyone is likely to come up with.

It was in some ways a darkly pastoral record, glinting with bright sunlight, but threatening a sunset that might bring all kinds of horrors. It indicated a passion for creating strange sounds from analogue synths that justified the Krautrock comparisons, but it also had a slightly primitive-sounding hey-nonny-nonnyish tone that validated the medieval tag. All in all it felt not quite of its time, and it made Stealing Sheep an intriguing prospect.

Their second album, Not Real, sounds much more of the present time, but the trio have brought the dark pastoral feel into the 21st century. It’s more of a pop album, specifically a synthpop album – think Hot Chip, Bat For Lashes and maybe even La Roux. Yet for every catchy hook there is an unexpected detail, or a turn around a concealed corner.

Deadlock, for instance, is one of the likeliest earworms here, powered by its chorus. But it’s followed by the sparse, sinister Evolve And Expand, an acoustic track which might sounds rather sweet if you only tuned into it in time to catch the wordless vocal hook that kicks in midway through – and thus missed the opening line, delivered with breathy nonchalance: “They will cook you up and grind you down for glue and clay.”

Similarly, Love is a fine pop song about re-reading love letters that shuffles and shimmers towards a conventionally catchy chorus – “L.O.V.E., spell it out so I can see your love” – but it breaks with pop conventions in some ways. There’s just a little too much drone in the background organ sounds, and sometimes a little too much weight placed on a single synth part for it to feel conventional – and it’s all the better for that. It contains one of the album’s loveliest lyrics, too: “My pastel heart turns fuchsia pink.”

Greed is another particularly strong track. It begins with a slow, primitive beat, and hidden in the mix a hint of dissonant percussion. When the vocal line begins it’s delivered with the nasal insouciance of John Lennon; backing vocals then intone the melody, and the combination has the effect of a rising drone. Snippets of brass, woodwind and organ gradually enter, sounding halfway between Celtic folk and Indian raga. That Lennon-like singing is not the only The Beatles reference that comes to mind.

Not Real might feature some curious details, but the album lures you in with a triple-run of poppier tracks – Sequence, with its big bass synth; the light-footed Apparition; and the title track – opening the record. At first Stealing Sheep might seem to have become over-reliant on synths, but closer inspection – and a foray into the deeper, darker recesses of the album – reveals that the folk moods and instrumentation are still in there.

Stealing Sheep consists of three young women from Liverpool so it might be a bit of lazy comparison to say that they sound like an experimental reboot of Atomic Kitten. But listen to Sunk: it opens with sparse percussion and guitar and feature with a psychedelic synth solo, but between these two parts is something not terribly far removed from a traditional pop ballad, enriched with the three-part vocal harmonies that are so integral to the band’s overall sound. It sums up an album that’s more mature and focussed than Stealing Sheep’s debut, harnessing all of their interesting quirks within a showcase of excellent songwriting.