Stephen Malkmus & The Jicks – Wig Out At Jagbags 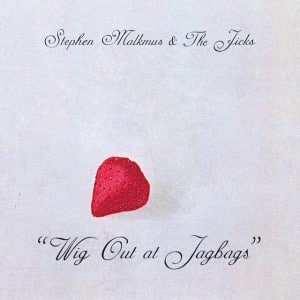 If any musician seems perfectly suited to a position of indie rock elder statesman and wry social commentator then it is Stephen Malkmus. The former Pavement leader always seemed older than his years, and the fact that he has now released more albums with his band The Jicks than he ever did with Pavement, six now to be precise, removes him even further from those halcyon days in the indie rock zeitgeist. It’s a position he appears to revel in on the fantastically titled Wig Out At Jagbags.

Now resident in Berlin with his wife, Malkmus’ idyllic home life has prompted him to make a record that is lighter, wittier, funnier and more melodically accomplished than anything he has released since his acclaimed solo debut in 2001. Whereas the last Jicks record was recorded by Beck, Jagbags is stripped down and relaxed, with the departed Janet Weiss replaced by the excellent ex Joggers member Jake Morris on drums, with recording helmed in Amsterdam by long-time Pavement sound engineer Remko Schouten.

Jagbags (a word described by Malkmus as a Chicago term used to describe an insufferable know-it-all) is the sound of Malkmus reflecting on his past while content to travel along on his own merry way, imbued with a love of the music of his youth, as he reminisces about the uncomplicated joys of earlier times on the ebullient single Lariat or the gauche awkwardness of teenagedom on sprawling closing track Surreal Teenagers. Perhaps the best thing about the album is it’s not the sound of an angry and bitter old man but rather someone who is completely at peace with his music and his life, simply making some great music as he always has.

There is, though, a greater sense of clarity and coherence about Jagbags. Where previous Jicks records have indulged in ponderous, proggy meandering and riff based workouts, Jagbags instead swings with an infectious lightness of touch and copious hooks. Familiar tropes remain as on Planetary Motion or the dark rock of Shibboleth but these slightly less inspiring tracks are leavened by some of Malkmus’s best pop songs. Lariat is an uncomplicated joy, which features an early contender for lyric of the year in his reflection “We lived on Tennyson and venison and the Grateful Dead”. This single, as well as the rousing skip of Houston Hades, take you back to Pavement at their most accessible and joyous.

Elsewhere, Malkmus knowingly pokes fun at himself and the culture of punk rock reunions on Rumble At The Rainbo. “Can you remember the thrill,” he asks, before giving the comforting payoff, “No one here has changed and no one ever will.”

That’s not quite true of Malkmus though. Musically, Jagbags sees him relaxing so much that J Smoov is a quite lovely piece of countrified soul that shows a different side to his voice as he settles into quaint falsetto. This song, as with many on the album, features numerous horns and trumpets. Stephen Malkmus as jazzy lounge crooner could be an interesting future direction.

Stephen Malkmus’s career post Pavement has largely been hit or miss, but on Wig Out At Jagbags the hit quota is as high as it has ever been. This is the album that any Malkmus aficionado would hope for.