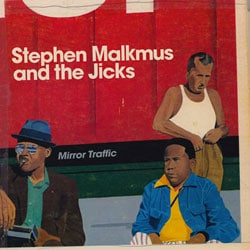 Post-Pavement Stephen Malkmus output is a hit-and-miss affair: while Pig Lib was rather fantastic, Real Emotional Trash fell flat. But let’s not kid ourselves – Pavement, though much feted in retrospect, did not have the Midas touch on each and every occasion.

So which Malkmus greets us for this, the fourth Jicks long player? Is it Steve the wistful Anglophile or Stephen the obtuse? With the ever-welcome Beck manning the production desk – a first ever co-billing for the veteran pair – Mirror Traffic is far more the former and far less the latter.

Indeed, one need look no further than album opener and rapturously received recent single Tigers for evidence: a glorious, infectious and utterly melodic salvo, it is Malkmus – and the Jicks – at a peak, all hooking riffs, deceptively complex layers and pop sensibilities with roots stretching back decades.

Beck’s handiwork, too, is never far from the fore. No One Is (As I Are Be) channels the folk spirit of the Mutations LP – its languid acoustica affording a reflective Malkmus all the space he needs – while Asking Price seems to recast Face The Truth’s Malediction to span the short distance between Terror Twilight and Sea Change.

Not that Mirror Traffic constitutes on big mutual backslap: Senator is Embassy Row, all bells, whistles and gnashing intact; the fret-fancy Stick Figures In Love gallops along apace, its breathlessness at odds with its trackmates but wholly effectual at the album’s halfway point; and Spazz is both slanted and enchanted in its off-kilter punk-jazz attire.

As ever, there’s a jamming seam throughout the Malkmus landscape, with the likes of Brian Gallop descending (or ascending, more appropriately) into freeform guitar passages that, while inevitably slightly indulgent, are never less than engaging, tuneful and, above all, enjoyable.

Besides, such flights of fancy are reined into cohesion more often than not as the band hone their sound to exacting degrees (they have, after all, now been together as long as Pavement were) and it’s just as well: at 50 minutes and 15 tracks long, Mirror Traffic is not to be taken lightly.

That said, neither is it an album that overstays its welcome: as Long Hard Book’s meandering, meditative, Trojan Curfew-esque chords find their way through slide guitar strings into a distinctly country-like ether, sounding for all the world like an album closing riposte, another six tracks await.

Among them, Share The Red touches upon Real Emotional Trash’s somewhat abortive prog – Malkmus toying with time signatures before appending a beautifully simple melody – while Forever 28 trots out lyrics as sharp as its shredding chorus and All Over Gently plots an anomaly on the Jicks scattergraph, its leftfield swagger a mark of the standout musicianship on show.

And then, as Gorgeous Georgie fades – a tender, enveloping embrace of a track bearing the hallmarks of all of its progenitors – it is suddenly all over, and all that’s left is to reflect on an album that could go toe-to-toe with a Brighten The Corners or Crooked Rain, Crooked Rain any day; a genuine career highlight and a collection that can only get better and better with repeat spins.