by Matt Beattie
published: 25 May 2018 in Album Reviews
Tweet 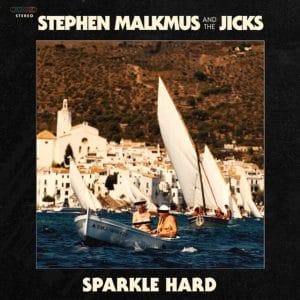 Why? Keeping abreast of current affairs, it’s a question that you have surely been asking more and more, to diminishing returns. Why? Why aren’t we, why should they, or even (and especially), how could they? We ask for justification in the face of monumental, civilisation-threatening uncertainty because… well, what else do we do?

It’s a question shared by Stephen Malkmus & The Jicks. Within the community of DIY indie rockers, Malkmus is king and godhead; Pavement and Silver Jews were crucibles for his crown, and his subsequent run of worthy solo albums with the Jicks has only cemented its placement. His scuzzy songwriting and sarcastic yet allusive lyricism have remained a conduit for the disillusionment of countless bored teenagers, as well as a template for many thousands to assemble their own sardonic crews of social outcasts in garages throughout the USA and beyond.

Malkmus has said that Sparkle Hard, his seventh record with The Jicks, involved a fair degree of “navel gazing” in its realisation. This is hardly surprising considering the current lay of the land. Malkmus – as we often see in our more introspective elder statesmen – considers the value of his voice amid a tangled morass of political upheaval at home and abroad. In his own words: “There’s a world that prompts you to put your best foot forward.” Unfortunately, you get the sense that Malkmus may have come to this self-conscious realisation too late in the process of assembling his latest album.

Cast Off is our introduction to the sonic world of Sparkle Hard. A drowsy piano draws us in as Malkmus’ requests that you “speak out if you know that you are unable to follow,” before crunchy drop-tuned guitars wail all around. The directness of the messaging here is certainly refreshing, but it is a pity that it stands bare without applied context as a half-baked platitude.

Future Suite and Solid Silk follow with the usual Jicks fare of pretty, jangly instrumentation married to twisty metaphors. Both songs are bright and summery, with a string section in Solid Silk providing an arch romance over Malkmus’ self-referential and self-effacing lyrics about scratching out “a doggerel verse or two to set you back on your way,” but the foggy, impressionistic lyricism belies his brief attempt at modesty.

From here we make an about-turn, and the grunge guitars are back with a vengeance. Bike Lane opens with a menacing thrust like a tamer cut from Thee Oh Sees. Here, on the sharpest political point of the album, Malkmus skewers the bourgeois concerns of local civic politics, contrasting with the unrelenting injustice of police brutality against black and minority ethnic communities all around America. “Another beautiful bike lane!” he sneers over and over on the refrain, his snarkiest foot front-and-centre.

Discussing the song with Pitchfork, Malkmus describes the sound as starting “really minimal, like Queens Of The Stone Age on Xanax, and then [changing] into glam, like The Clash or something. In my mind, I was singing like The Ramones.” To some degree, it is reassuring that Malkmus himself is aware of how heavily he has cribbed from his rock forebears while assembling a modish musical palette for Sparkle Hard, but the experience as listener across the rest of the album becomes a game of musical charades that detracts from the already ephemeral messages. It is curious too that on Bike Lane, a song ostensibly about refocusing and prioritising political action by shirking niche concerns, Malkmus draws influence from and name-checks a set of white acts that established themselves as stylistically oppositional to a white mainstream interpretation of what began life as black rhythm-and-blues music.

Over the course of Sparkle Hard, the band explore and exploit a variety of sonic avenues, ranging from krautrock dirges (Rattler) to meandering funk (Kite, Let Them Eat Vowels). The productions are artfully arranged, with just enough glossiness to tastefully counteract the scuzzy guitar antics. Continually, specificity is in short supply as Malkmus falls back on his laurels, crooning veiled allegories like carefully abraded streams of consciousness. Despite what might be presumed from the track’s title, Middle America features some of the most abstruse messaging on the album, failing even to land a direct punch with the words “men are scum” by continuing vaguely “I won’t deny, may you be shit-faced the day you die.” While his thoughts may come from a place of emotional sincerity, Malkmus’ old habit of indulging in nebulous lyricism repeatedly spoils his better intentions.

So then, why? Why make this album, and why listen to it? It’s a question that is difficult to answer in a sociopolitical context that seems to demand more direct action than Malkmus provides across Sparkle Hard’s 11 tracks. The music is plainly listenable, the progressions are often entertaining and the lyrics are intricate. For fans, the minor evolution and heavier sonic palette may whet their appetite, but for anyone in search of a new revolutionary energy in the realm of indie rock, steer clear of the throne room.