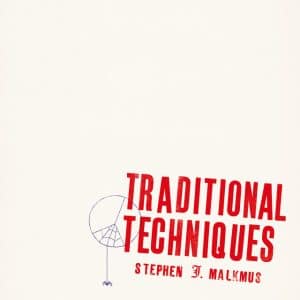 Sometimes, you love an artist so much that you just wish they’d give it a rest. Being a fan of Stephen Malkmus these days feels like what it must have felt like to be a fan of The Grateful Dead in the ’70s. So much output, in such a short space of time, and at a consistently high level, that you wish he’d just space it out a little bit. Malkmus’ last two albums, Sparkle Hard and Groove Denied, released within 10 months of each other, were definitive showcases of the best (and some of the worst) of his songwriting abilities, from the sublime to the ridiculous.

Now, merely one year later, another platter has arrived. Traditional Techniques, at 11 tracks, is another lengthy addition to the rapidly growing Malkmus catalogue, and it takes his career path off in another different direction. After the punchy, woolly chug of Sparkle Hard, and the synth-laced experimentalism of Groove Denied, he’s turned his attentions to a different style altogether – acoustic folk music, blended with hippy campfire rock and oddball ‘world’ grooves.

The record is “centred around Malkmus’ 12-string acoustic guitar”, features a “variety of Afghani instruments”, and purports to be honouring the legacy of “a half-century of folk-rock reference points”. It features appearances and production assistance by Chris Funk of The Decemberists, and Matt Sweeney (Iggy Pop, Bonnie “Prince” Billy, Chavez, the ‘Guitar Moves’ web show) plays guitar across the entire record.

And what of the songs? Xian Man and Shadowbanned are two of the better tracks on the collection, and both rely on Malkmus’ long-held rhythmic eccentricities – if they were played through electric guitars, you’d know it’s him before he even sings a word. Brainwashed is another classic Malkmus slice, with added world-weary Lou Reed-isms. The tender country of Signal Western is another track worth investigating, simply because it’s a beautifully constructed, delicately played humdinger of a cosmic cowboy ballad.

Some of the tracks are misfires, sadly. The Greatest Own in Legal History doesn’t quite pull of the ‘third Velvet Underground album’ tenderness it’s after, confusing proceedings with uncomfortably knotty guitars and some lyrical bollocks about spreadsheets. Juliefuckingette is also a bit tedious, sounding like a demo Damon Albarn discarded 25 years ago, before he’d even heard of Stephen Malkmus.

How much you enjoy this record is largely contingent on how many times you’ve played Groove Denied. If you found that record a bit of a slog, there’s plenty to get you back on board here. If you listened to it once, and never again, then this might also be the record for you. If you’re still not over Pavement, and refuse to listen to any Malkmus project that doesn’t contain at least one reference to them in the press material, then you’re out of luck here. On the off-chance that you gave Groove Denied its fair due, and gave it space to grow and then you investigated whatever it is that’s to be found on that record, then you absolutely must listen to Traditional Techniques.

The fact that this is probably the least engaging album Malkmus has ever released isn’t really too much of a concern, as his audience have always been in it for the long haul (the long haul being the gaps between Pavement reunions). Traditional Techniques is neither a revelation nor a disaster, it’s neither a winner nor is it a loser. Simply put, this is a very, very niche record that will likely sink, never to be seen again, as soon as Pavement step foot on the Primavera Sound stage in June (coronavirus permitting). But if you were to give it a few spins, who knows where it might end up taking you?