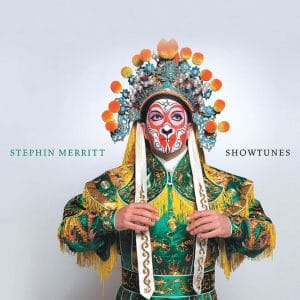 In 2003 – four years after 69 Love Songs, Stephin Merritt collaborated with the director Chen Shi-Zheng on a new version of the 13th century Chinese opera The Orphan Of Zhao.

It didn’t come as much of a surprise – Merritt has always shown interest in musical theatre, has often imposed arbitrary formal constraints, and has never been in love with the sound of his own voice: Susan Anway was meant to lead the Magnetic Fields, not Merritt, and the Sixths aren’t a band so much as a way to have famous people replace him at the microphone. The opera sounded great, but hardly something that would tour. And it didn’t – there was a week-long New York run, and I grew just more jealous of those in the Tri-State area.

Three years later, Showtunes brings us the highlights of Zhao and the two collaborations with Chen Shi-Zeng that followed, Peach Blossom Fan (17th century Chinese classic) and My Life As A Fairy Tale (2005 original). It’s not, perhaps, an ideal arrangement – the twenty-four songs sometimes feel awkwardly jammed together, and as tracks aren’t grouped, the electric atmosphere of an original cast recording is rather dispersed.

Still, it’s significant that the title is Showtunes, not Three Chinese Operas, as first planned – these are songs from shows, the kind that might pass in piano-bar revue. The missing tracks will be available from iTunes, but as disconnected pieces the songcraft is allowed to shine.

Each of these tracks – the duelling-banjo Train Song; the elegiac And He Would Say – is really perfectly formed, beautifully satisfying in structure alone. That isn’t to say the arrangements are no good – if the mixture of traditional US and Chinese sounds (jinghu, pipa, lute, autoharp) isn’t quite new, it is organic and fresh, and there are some wonderful vocals.

Yet the joy is in the chord changes, the deft footwork round the bridge, in lyrics written, for all appearances, by the staff of the New Yorker: “I thought this was the world for me: / Wrong world, sorry./ I’ll sing love songs before I go: / Sorry, wrong show”.

Merritt, with his irony and his cigarettes, is often accused of cold formalism. That’s a stupid thing to say in any case, but especially now.This formalism isn’t cold, and it’s the reason why three shows can be shuffled together successfully as an album.

Every song is a hymn to the joy of music in itself, to graceful, spooling escape from the normal world: “we watch the world decay and dance the night away”, as the broodingly Weimar At Madam Plum’s has it. Ukulele Me! is utter, joyful nonsense: “one-kulele, two-kulele, how-i-feel-we-could-be-kulele;/ x-kulele, y-kulele, z-kulele, ukulele me!” A strangely comforting outlook.