Steps – What The Future Holds Pt 2 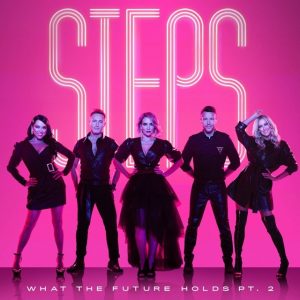 At this point in their career, iconic pop heroes Steps are firmly focused on fan service. They know what their audience wants and they are going to give it directly to them, wired into their veins for maximum pleasure. It’s this ethos that has driven their reunion and spurred them on to release What The Future Holds Pt 2. It was originally intended to form part of a deluxe special edition of their 2020 record, but instead turned into an all singing and dancing new Steps extravaganza.

Yet while Steps are firmly in a fan friendly pleasure zone, they still have scope to try and ever so slightly broaden out their traditional dance pop sound. The 11 songs (and four bonus acoustic versions) are imbued with a maturity that comes from 20-plus years as one of the country’s most successful and enduring pop groups. Songs like Wasted Tears have a pulsing drive and yearning resonance that marks them out from the euphoria of their earliest hits. It’s a pleasing mix of their dance pop hits with a mature Radio 2 pop sound.

There’s certainly no lack of energy here. The album is fizzy and frothy in the right places and chimes in with the disco sounds of Kylie Minogue’s last album, naturally titled Disco. Steps disco doesn’t quite have the force of personality of someone like Kylie though, and some of the songs don’t really stick. Instead they soar and flutter away pleasantly, but that’s about it. They’re here for a good time, with high energy pop rushes and room for a little cry or too at points.

In some ways this album is a celebration of their career and sees them working with some old collaborators. Take the ’80s vibing bop of Take Me For A Ride for starters, written by the songwriting duo Mark Topham and Karl Twigg who are responsible for all time Steps bangers One For Sorrow and Deeper Shade Of Blue. A collaborator of rather more recent vintage is bona fide pop legend Darren Hayes, who adds some gravitas on electro power ballad A Hundred Years Of Winter. Elsewhere, Trouble & Love is written by Fiona Bevan and Carl Ryden, who penned their big 2017 comeback single Scared Of The Dark. So for the most part it’s an ever so gentle tinkering of the formula by trusted hands. The biggest collaboration though is actual Michelle Visage, who turns up on the single Heartbreak In This City. It’s probably the record’s most vibrant moment.

This album may not be groundbreaking or revolutionary, or completely rip up the Steps template, but that’s ok. Fan service is important. There’s nothing wrong with being there for your audience and channeling into their primal feelings, and Steps are here as always for their pop salvation.