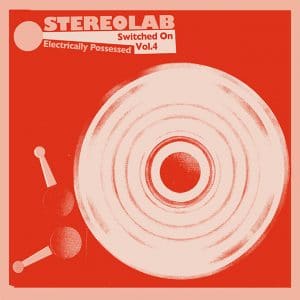 Back in 2005 there was a common consensus from critics and fans upon hearing Stereolab’s announcement that they were going on hiatus: perhaps it was the right thing for the postmodernist iconoclasts to do. Their decision possibly came as a result of the lukewarm responses to their recorded output after reaching a creative zenith with Dots & Loops, and almost certainly out of continued grief following the death of their beloved Mary Hansen, who had contributed so much to the groop’s dynamic sound since joining for their second album Transient Random-Noise Bursts With Announcements.

But they were never a band that liked to rest on their laurels, and continued to release albums long after the split. This compilation, the fourth and possibly final in their Switched On series, collects some of the various EPs, compilation tracks and tour 7″s they made between 2000 and 2005, along with some deep cuts that stretch back to the Mars Audiac Quintet era and proves the critics wrong.

Fans of their hypnotically sunshine motorik knew that their song titles were often as lurid and obscurely referential as the illustrations that graced their covers, usually containing wibbly references to vintage technical jargon, exotica puns, cryptic literary nods and onomatopoeic sounds. There’s further evidence of that intelligence here on tracks such as Outer Bongolia, Pandora’s Box Of Worms, Explosante Fixe, Fried Monkey Eggs and Calimero. The latter being a late ’90s collaboration between the groop and one of their all time heroes, avant-garde French chanteuse Brigitte Fontaine, in which they provided febrile nostalgic clicks and fluctuations over which Fontaine’s sophisticated monotone soars.

Some of their other musical influences make spectral appearances in the mix, and it’s not always Caetano Veloso, Silver Apples and Serge Gainsbourg melodies that you find hidden beneath the surface. The warmth and sincerity behind these unironic pastiches was what gained them fans the world over. There are echoes of Loose Joints’ strutting disco anthem Is it All Over My Face on 2006’s tour single Jump Drive Shut-Out, but there’s also a serving of John Paul Young’s campy Love Is In The Air and the wonderfully monikered Free Witch, and No Bra Queen from 2001 has a chugging momentum that recalls the near forgotten Wings hit Helen Wheels.

Taken from their 2000 EP The First of The Microbe Hunters (which appears here in its chronological entirety) the amorphous Farfisa that pulses through the shimmering Household Names perfectly sums up their quixotic political sound. The other moment of brilliance comes with the previously unreleased menacing glam buzz of Heavy Denim Loop Pt 2, showing just how buzzing and heavy the band would occasionally get.

One of rock music’s greatest unsolved mysteries is why the ongoing 33 1⁄3 mini book series has managed to cover seminal releases by artists as insipid as New Kids On The Block, Celine Dion, Duran Duran and Andrew WK but apparently not given any consideration to the eccentric and fearsome albums put out by the folks in Stereolab. Hopefully, that will change soon, as the band quietly reformed for live shows in 2019 and continue to reissue fantastic material such as this. And just maybe, if the gods are kind, we could even get some new records in the immediate future. Vive le revolutions!