Stereophonics – Graffiti On The Train 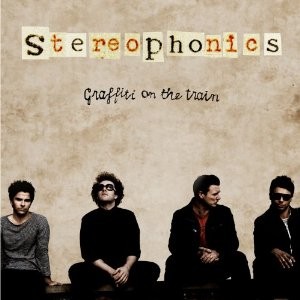 Put the peas on to boil, dear, we’re having meat and potatoes for supper. At least that’s the instinctive response from any self-respecting arbiter of cool on being presented with the new Stereophonics album, dashing off a 200 word sneer before heading to a recently-refurbished London gastropub for an oversized Sunday roast.

It’s a lazy tag, this “meat and potatoes” moniker. As Nigel Slater will tell you, there’s nothing wrong with simple, traditional food, well cooked with quality ingredients. Many many utterly wonderful songs have been penned without any concession to originality or innovation, and Stereophonics have been responsible for a fair few themselves. The real issue is that – the false dawn of Dakota aside – they’ve never really managed to match the exuberant tunefulness of their debut, content to toss out dreary plodders like Mr Writer or Step On My Old Size Nines.

The tragedy of Graffiti On The Train is that despite making possibly their most interesting album yet, and giving themselves a fighting chance to earn some musical credibility, the quest to rediscover quality songwriting still eludes them. You can hear the band reaching for new pastures, but too often they either don’t explore far enough and return to safer ground, or lack the tunes to soundtrack this new sense of adventure.

Of course, there’s a bigger and much more real tragedy hanging over the record – the recent death of drummer Stuart Cable, sadly no longer larger than life. There are no explicitly obvious references to his passing, but a reflective, sombre mood prevails, particularly in the title track and slow-burner Violins And Tambourines. The former tells the story of a man’s final train journey that recalls the similar tragedy of Local Boy In The Photograph, both in its subject matter and its vivid, eloquent narrative. But in the latter, the old problems re-surface, and despite the stripped back arrangement and unexpected shift into a higher gear for the finale, it’s tautological clunkers like “everything is changing, nothing ever seems to stay the same” that stick most in the memory.

Other songs fall back into familiar formulas just when they seem to be going somewhere. Take Me is a duet with a haunting female vocal, almost Nick Cave at times with its ominous repeated guitar riff and sparse drum rolls, but a slide guitar and plodding beat soon consign it to the bland bin. Roll The Dice has an intriguing coda with Bolero-esque strings, but to reach it you have to sit through a substandard beefed-up Beatles number, with all the brass bells and whistles of Oasis at their most cocaine-y.

The highlight is the almost jaunty single Indian Summer, which allows violins to scrub where guitars would normally chug, and whose soaring chorus evokes the Manics at their poppiest. It’s a welcome lift from the despair that pervades the rest of the album – despair that reaches its peak when you get a minute into doo-woppy blues trudge Been Caught Cheating and realise there are three more minutes left.

A missed opportunity, then, but also perhaps the beginnings of a creative resurgence. Just one bolder step away from the arenas and into the unknown, and Stereophonics could have quite a surprise up their sleeves next time round.