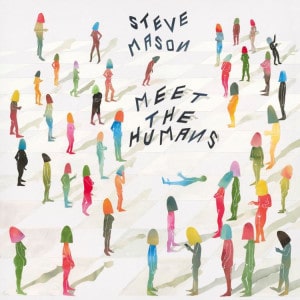 Cast your minds back to the 1990s. Alongside the tired heraldry of the Britpop wars, besieged by one-word bands coming and going through pop’s revolving doors with tuneless abandon, there was The Beta Band: four scamps intent on injecting some fun through their melodic meld of Traffic’s jazzy organic folk, Syd Barrett’s lysergic whimsy and a sackful of low-slung shuffling dance beats.

Their key component was singer and songwriter Steve Mason, whose downbeat melancholy stopped them being merely bubblegum ready to pop. Having used various pseudonyms (Black Affair, King Biscuit Time) before releasing records under his own name, Meet The Humans is his third solo album.

His recent move to Brighton and choice of producer (Elbow’s Craig Porter) appears to have focused his musical pick ‘n’ mix style, couching each track in its own bubble. Whether it’s the lush strings on the anthemic Hardly Go Through, the sparse and haunting ambience on Through My Window, the deep house piano on Water Bored or the breakbeat loops on Words In My Head, this is Mason’s brightest, most cohesive set since his Beta Band days.

The puntastically-titled Water Bored veers dangerously close to the world-music dabblings of Peter Gabriel (or is that Brian Pern?), with its hi-life tumbling sunshine chords sounding like a healthier Movin’ On Up. Finding encouragement out of depression, it’s a defiantly upbeat introduction to Mason’s chirpiest collection of songs so far, and sets the tone for the rest of the album. His previous work Monkey Minds In The Devil’s Time was more heavily politicised, but there is still room here for strident opinion. On Alive he injects a real drive to the vocal, with lyrics covering political machinations preventing him from being truly alive.

The only track that seems to drop the ball is the overlong Alright. It gets swathed in strings to make a wall of sound when it feels like it needed a shrubbery. Meet The Humans brings into focus more sharply Mason’s touchstone lyrical themes of the joy of life and the possibility of redemption; none more so than on the beatific Planet Sizes, a pure celebration of all that is positive in the universe, yet without lapsing into ‘greeting card’ platitudes.

Positivity abounds across Another Day, with its breezy offer of support, and the clappy – and happy – To A Door, with its washes of lush harmony. There’s more in this vein on the closing whammy of upbeat piano-led anthem Like Water and euphoric club-inspired Words In My Head, while Hardly Go Through sets an atonal drone to pulsing strums to plot the pain of emotional reliance on a difficult partner that swells with strings, like a lush Yo La Tengo.

Sparse and haunting Run Away and Through My Window plumb minor chord heartbreak depths of isolation with just guitar and piano like a modern day Syd Barrett pondering if there is ‘anybody out there’, and the title track has a life-enhancing warmth to it that doesn’t reek of mid-life crisis self-help, but rather something that has been genuinely felt; the equivalent of a musical anti-depressant.

In times where attention spans diminish and individual tracks seem flung together as albums, Meet The Humans is that rare beast of an album that embraces you for the good and soul-searching times, and you feel nourished for its existence.