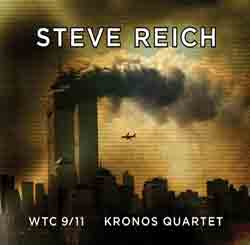 Much of the publicity leading up to the release of Steve Reich’s piece to commemorate the 10th anniversary of the 9/11 terrorist attacks on the World Trade Center has focussed on the cover art, a surprisingly lurid, artificially manipulated shot of the incident unfolding. It doesn’t particularly add a great deal to the release and has possibly even contributed to shifting the focus away from the composition itself, a brief three movement piece for string quartet, played here by the Kronos Quartet.

It begins in uncomfortable style as violins play out a replica of the sound of a disconnected telephone, an incorporation of Reich’s personal experience on the day which was dominated by lengthy phonecalls to his Manhattan-based son. This is soon joined by distorted, muffled recorded dialogue of individuals caught up in the attack, truncated and repeated to unsettling effect. Musically it is a difficult, jarring listen, although unquestionably effective in portraying the chaos and claustrophobia of the day.

The second movement again incorporates looped witness testimony, over anxious, jittery string arrangements. Musically it does reference concepts present within Reich’s other compositions, namely minimalism and the use of repetition, although understandably has much more tension running through it. In many ways it is a small, abstract historical document in itself in its use of verbal statements. In comparison to his other ‘historical piece’ Different Trains (which focused on the Holocaust) it is much more bruising and direct, having no real room for subtlety or nuance.

The third movement sees the appearance of a drifting vocal melody that adds a small measure of comfort. On the whole however, the piece never really exhibits a sense of mourning or loss, particularly unusual given the widespread inclusion of human voices throughout the piece. Instead it seems much more concerned with documenting the shock, panic and fear inspired by the events. Whatever the angle of approach, it is a stark and fascinating addition to his oeuvre.

The additional two pieces on the album are more recognisably Reichian in nature. His 2009 Mallet Quartet, scored for two marimbas and two vibraphones, features the structural complexity and shifting rhythms usually associated with Reich, the lustrous, glossy sonorities occupying similar territory to his seminal Music For 18 Musicians. The final piece on the album, Dance Patterns, has a broader sound, xylophones and vibraphone providing free-flowing pulses of sound whilst pianos add a reflective, pensive quality. The greater space afforded between the piano chords towards end lends the piece a certain grandeur.

Taken together, the respective pieces further confirm Reich’s elevated status in the world of contemporary classical music as a prolific and consistent creative force. This album shows him to still be in thrall to the possibilities of composition and unafraid of tackling the bigger issues it can so powerfully address.