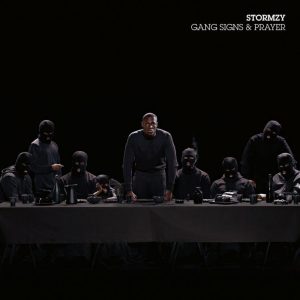 When Kanye West enlisted the help of the UK’s biggest grime artists for his performance at the Brits in 2015, few imagined that it would be the start of a renaissance for the genre in this country. Its mainstream appeal hit new heights last year when established artists Kano and Skepta both released critically-acclaimed albums and received Mercury Prize nominations, with the latter picking up the award for Konnichiwa.

Not only did Skepta receive awards recognition for his fourth LP, but it also peaked at Number 2 on the UK Album Chart – showing that it was not just the critics who were liking what they heard. Rarely since Dizzee Rascal burst onto the scene with his Mercury Prize-winning debut, 2003’s Boy In Da Corner, had grime achieved such widespread popularity. Instead, it was usually dismissed as an underground art.

With all that in mind, what better time for Michael Omari, better known by his stage name Stormzy, to release his debut record, Gang Signs & Prayer? The 23-year-old Londoner has long been considered a rising star of the genre, winning Best Grime Act at the 2014 and 2015 MOBO Awards (as well as being on stage for Kanye’s Brits performance), but his profile was given a huge boost by the release of single Shut Up.

The humorous diss track, which he performed for British heavyweight boxer Anthony Joshua’s ring-walk for his fight with Dillian Whyte, climbed the charts and eventually finished ahead of The X Factor’s entry for the Christmas Number 1. Having well and truly laid the groundwork for future success, Stormzy then went into hiatus for much of last year and allowed the anticipation to build for his first major commercial release.

It’s a tactic that could have backfired, but it actually worked to his advantage. Lead single Big For Your Boots, a swaggering and hard-hitting comeback statement, went straight into the Top 10 of the UK Singles Chart thanks to its intense choral stabs and witty lyrics (“I was in the O2 singing my lungs out/ rudeboy you’re never too big for Adele”), while a billboard campaign promoting Gang Signs & Prayer created huge buzz.

Yet anyone expecting the young MC’s debut effort to replicate the formula demonstrated on those first two singles throughout its runtime will be surprised by what they find. Opener First Things First gives the first indication that there is more to Stormzy than meets the eye, as he addresses his haters with a raw verse over a mesmerising melody (“Had problems with the fam/ I had problems with the gang/ but I put that shit on pause”).

But that is nothing compared to Blind By Your Grace Part 1 and 2, which sees him take the bold step of diversifying into gospel music – something previously hinted at by his Live Lounge cover of Kanye’s Ultralight Beam. The religious message reaches a fervour on the organ-led second part as MNEK lends his vocals, while Velvet features a sultry Frank Ocean-esque R&B hook and Cigarettes & Cush delivers a melancholic slow jam.

If it sounds like Stormzy has completely abandoned his grime roots, then you would be mistaken. There is still plenty on Gang Signs & Prayer to appease those who were sucked in by diss tracks like Shut Up, with Return Of The Rucksack and Cold both firmly in the uncompromising bangers category. Then there’s the fast and furious Mr Skeng, on which he pulls no punches as he provides further proof of why he is considered the genre’s heir apparent.

However, Stormzy’s ability to reel off confrontational raps over staccato beats has never been in doubt. Gang Signs & Prayer does a brilliant job of introducing the world to the full scope of his talent, dismissing any notion of him being a one-trick pony. This is the work of a man who is comfortable pushing his craft to the limits and blurring the boundaries. It’s not perfect – it’s too disjointed for that bold tag – but the ambition is extraordinary.