by Sam Shepherd
published: 24 May 2010 in Album Reviews
Tweet 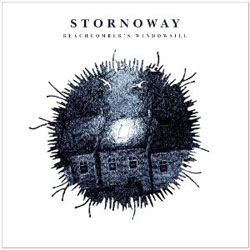 With Supergrass shuffling off into the sunset, one of Oxford’s biggest success stories comes to an end. But when one door closes, another opens – even if Foals have already kicked the door in and set about partying in the basement. Stornoway, by contrast, are far too polite for such behaviour. When they first appeared a few years ago, their peculiar ditties about ocean ecology (The Good Fish Guide) almost served as misdirection. Such an approach, whilst amusing, diverted attention away from the fact that amongst all the eccentricity, this was a band that were phenomenally talented.

Now signed to the ever reliable 4AD, a label that comes with an automatic seal of credibility, and with successful gigs at Glastonbury and other assorted festivals under their belt, 2010 is set up to be Stornoway’s breakthrough year; Beachcomber’s Windowsill suggests that they deserve more than a passing glance.

Opening with Zorbing, a track that sounds instantly familiar due to its immaculate vocal harmony (and the fact that it has been a live favourite for some time now), Stornoway kick the album off with what might be their strongest moment. It’s a gamble, but its easy demeanour and beautiful hymnal hook is as welcoming as a fluffy blanket and the promise of a nice cup of sugary tea. If all this sounds rather twee, it’s worth noting that these perfect melodies mask a sense of uncertainty and detachment found in the lyrics.

This detached feel resurfaces on We Are The Battery Human, a song that is pitched somewhere between the duelling banjos of Deliverance and the slightly unnerving folk of The Wicker Man. The collision of the authenticity of Stornoway’s folk with the techno-dread of the lyrics is disconcerting, if well observed. A warning about the apparent dependence of mankind on technology, which sounds as if it is being sung by a bunch of barrel-makers, is a well judged piece of satire that shows the band have developed their humorous approach from the slightly dodgy Good Fish Guide into a sharpened point.

Setting Stornoway apart from other folk bands is the incredible vocal dexterity and command of Brian Briggs. If the hymnal refrain of Zorbing doesn’t appeal, then the heartfelt delivery that graces Coldharbour Road’s tale of regret, ageing and occasional hope should do the trick. Awash with emotion Briggs keeps his delivery perfectly controlled, never pushing for histrionics but instead allowing the cumulative efforts of the band to make the song soar wonderfully. Similarly, the undeniably catchy melodies of Here Comes the Blackout…! are perfectly understated, allowing room for the band to breathe as a whole.

Watching Birds finds him pitching an almost spoken-word monologue over Stornoway’s most rock-oriented moment. It unfurls into an up-tempo hoe-down that sounds as if it could have been written by the Velvet Underground, had they grown up as country bumpkins and gone to school with Bill Oddie. As with We Are The Battery Human, Watching Birds suggests that the band have honed their idiosyncrasies into something bigger than charming diversion.

With every listen, Beachcomber’s Windowsill reveals a new layer of depth which in turn suggests that Stornoway have released one of the most impressive debuts of the year.