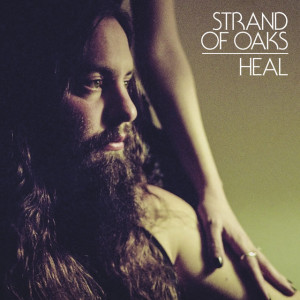 Strand Of Oaks‘ loudest and most emotionally direct album yet, HEAL, is akin to primal scream therapy, and in that context, the capitalisation of its title is entirely appropriate.

Long gone is the quiet folk and in its place is, primarily, raucous, loud, and emotional rock. Lyrically Tim Showalter (for he is Strand Of Oaks) pulls no punches in addressing his life in stark and honest terms. If all this sounds rather bleak fear not, Showalter has not rescinded all notions of melody in order to purge.

HEAL was created from a period of turmoil with faltering relationships and creative uncertainty leading to the need to evaluate and change. Over three weeks, Showalter wrote 30 songs and attempted to make sense of his life, before cutting them back for the 10 that make up this album.

Appropriately, the album starts at the beginning with Goshen ’97 finding Showalter remembering his youth creating music. Despite being lonely, he was having fun, singing Pumpkins in the mirror and hiding menthol cigarettes under his bed. Rediscovering his love of rock, it’s a song that sees a the first real musical shift for Strand Of Oaks for some time, and with screaming guitar lines provided by J Mascis it’s a reminder of the comfort to be found in big rock tunes, even when you’re alone.

It’s a theme that’s also explored on the epic JM, a song that acts as a tribute to Magnolia Electric Co.’s Jason Molina but also lays out bare the supportive nature of music when things are heading over the edge of a cliff. It undulates between hushed storytelling and all out attack fluxing between states of mind and mood. “Either get out or stay in, I won’t let these dark times win, I got your sweet tunes to play,” croons Showalter before hollering in defiance and launching into a thundering Neil Young inspired crescendo.

The title track ignores all-out guitar attack and looks instead towards early ’80s synth pop. It’s so full of hooks that it is easy to miss the turmoil at the heart of the song. It’s here that Showalter puts it all on the line, and addresses the mess that his life has become. The line “I know you cheated on me, but I cheated on myself” points to infidelity at the heart of his relationship, but also the self doubt that had crept in to his life, whilst “I drank too much and I took too much, I lied to all my friends about who I was…I spent two long years just losing my mind” is self explanatory. Bookending the song are two instructions, probably emanating from with Showalter’s psyche. The first insists “you’ve got to give up, give in” whilst the second counters with “you’ve got to heal”; thankfully, he listened to the second.

Infidelity and lost love are subjects addressed on a number of songs on the album. Mirage Year, which bears some resemblance to Bruce Springsteen’s The River, is steeped in anger. “I was in love but it was changing,” he sings delicately, acknowledging an uncomfortable truth but when he sings the line “that winter when you took my love, and that fucker was having his fun, but my hands are worth more than your blood” it culminates in a blood curdling scream that suggests barely concealed murderous rage. Later, Wait For Love’s sedate approach however suggests that he’s ready to move on with the line “I’m giving up getting over you now”.

Perhaps the finest moment comes in the form of Shut In, a rumbling Celtic tinged rock song that sees Showalter questioning his faith in other people whilst admitting that “it’s not as bad as it seems, we try to get better in our own way”. In this instance, it is most certainly a case of musician, heal thy self. That an album that sounds this vibrant and thrilling came out of such dark circumstance is a testament to the songwriting skills of Showalter. Pain never sounded so good.

Strand Of Oaks MP3s or CDs

Strand Of Oaks on Spotify