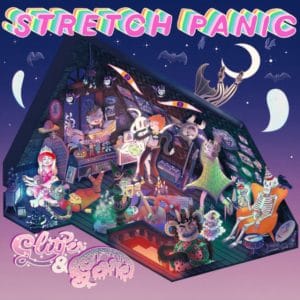 The neon wigged trio who make up Texan ghoul pop band Stretch Panic appear to have drawn a sparkly pentagram around a bunch of punk funk seven inch vinyl with sherbet and popping candy, summoning some sassy girl group succubi who (if there were a god) would be named Ronnie Spectre, to help them to create 13 refreshing paeans to queer love and imaginary monsters. And this is surely the only way to explain this deliriously spoopy debut album.

Then we have You Cant Stay; an ESG indebted zombie shuffler rife with classic B-52’s style harmonising and alarming amounts of cowbell. The multilayered vocals and choppy organ indentations of Ouija Boy recall the wonderfully cult sentimentality of Veronica Falls’ Found Love In A Graveyard and the whimsical ska disco of Zombie Now is so charmingly ridiculous that it’s built initially around a kazoo riff.

The two album high points come with Psycho Mama and At The Ball, the former of which, in another dimension, is the great undiscovered single by The Fall. Try to imagine The Monks’ aggressive protopunk pummel being haunted by the slinky ghost of Julie London and you’ll groove to its louche rumble. At The Ball is the pastel coloured evil twin to Beat Happening’s 1989 hit Black Candy if only they had kept that band’s eerie adolescent twee bluster but lost Calvin Johnson’s snarling monotone in favour of The Shangri-Las‘ woozy prom dance melodramatics.