by Tony Heywood
published: 29 May 2006 in Album Reviews
Tweet 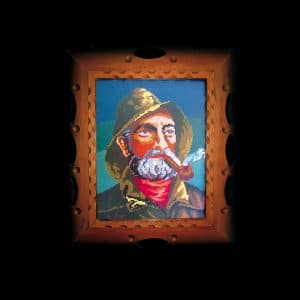 This is Stuart A Staples’ second solo release in little more than a year since the demise of Tindersticks. If Lucky Dog Recordings was him tentatively stepping out on his own, then Leaving Songs is a stylish samba.

It is the sound of a confidence restored. The songs on Lucky Dog sounded like Tindersticks in monochrome – bare and exposed. Leaving Songs is fuller, a warm inviting collection of songs. A full bodied vintage to Lucky Dog’s homebrew.

Country undertones have always characterised Staples’ work. It’s the warped country soul of Lambchop, the lighter moments of Nick Cave or the sadly missed Rockingbirds. Country fused with sweeping strings, film noir twists and an English perspective. To record the songs in Nashville makes twisted sense – Leaving Songs is lighter, more open then much of Tindersticks’ output. If Staples’ former band is the sound of heartbreak at 3am then this is the dawn breaking and the sun flooding in.

Those vocal chords it all there whiskey soaked crumpled glory stand proudly at the centre. Anyone unfamiliar with the sound it makes should think Mark Lanegan or later Tom Waits with a half glass of ruby red Leonard Cohen. Full of dark shadows, hidden creases, flecks of bitter disappointment and ripples of anticipation. A voice lived in, and full of life.

The opening lines on the record are “It’s not that I don’t love you or I am tired of your ways… but I catch myself in the mirror and remember I have to do something with my life.” Welcome to the restless world of Stuart A Staples. These are songs of doubt, of leaving and arriving.Ugly uncomfortable truths are reviled and probed. Staples doesn’t flinch from confronting himself and his failings.

All the self analysis and endless questioning could result in a turgid and bleak listen. The breezy nature of the music ensures that this is never the case. The piano playing throughout is flawless, the melodies sharp, the playing restrained, arrangements spot on. Every note is judged, nothing is over egged, and there is no showboating. Like classic soul music, everything is subjugated to the service of the songs.

On Which Way the Wind, the piano blends with a recurring funky organ riff and gentle strings. Deep rolling piano chords echo through the opening Goodbye Friend, providing a base for the delicate guitar part and pretty rhythm guitars. Terry Edwards, whose brass arrangements added so much to the sound of Tindersticks, is alongside Staples here. The warm brass adds bite and zest to the material.

There are two duets – This Road Is Long sung with Maria McKee and That Leaving Feeling with Lhasa de Sela. Both artists bring dazzling contrast and incisive radiance to Staples’ shadowy baritone. McKee’s voice is world weary, stained and broken, several lifetimes away from the woman who sang Show Me Heaven. It sounds like she has spent the last 10 years drinking whiskey and trying to escape her ghosts. And it’s beautiful.

Leaving Songs is not a huge stylistic leap forward, but that’s not a cause of worry. When you have songs this tight and a sound this rich there is no need to rush and change things.If you loved Tindersticks then you will adore this. If you have never heard that voice before and like your music bruised, romantic and aching then you are in for a real treat.