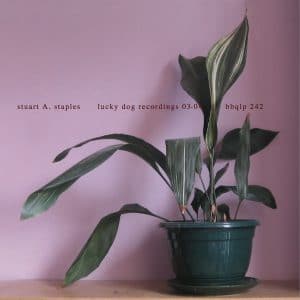 Stuart A Staples’ voice is so unique, so recognisable that anything he sings on will draw comparisons to his work with Tindersticks. His vocals are still all red wine, ashtray heartbreak and fading flock wallpaper. Yet on Lucky Dog, his first set of solo recordings, the music has been striped bare. The dense layered camber-pop of his band has been distilled down to its core. Gone are those beautiful string arrangements and sweeping rain swept dynamics. The music is constructed around minimal piano, organ, brass and guitar. The space in the songs allowing that voice room to roam.

For a lead vocalist and lyricist it’s strange to open with an instrumental. Somerset House is built around Yann Tiersen‘s fractured piano playing. The music building like a Morton Feldman coda, as Gina Foster adds wordless vocals to the shimmering melody.

The following Marseilles Sunshine is barely there. A few precious piano notes fall on top of mournful organ chords that linger like heavy August heat. Staples singing of the moments when you feel alive, when your heart beats faster, you can feel the blood pulsing in your veins. The teasing glockenspiel is suddenly jarred by a distorted guitar line. The ghost of Talk Talk circa Laughing Stock is evoked in mute fury, in its ebb and flow. It’s that stilted, that beautiful.

The pace is upped with the brisk Say Something Now. A circling riff is repeated on a set of guitars and then a saxophone. The instruments battling against each other, the sax becoming a series of squalls, creating a corrosive feedback into which the guitars disappear. A lone keyboard provides the backing on Friday Night, the patter of a preset rhythm underpinning the dolorous chord progressions, a bedsit bossa nova. The sound of a windswept pier in the winter, the ballroom empty but for the lost, lonely and old dancing away time in ever decreasing circles.

If Ian Curtis had lived to confront the onset of middle age he may have produced something like Dark Days. Staples vocals lonely, backed by a cheap guitar that is drowning in murky reverb. It sounds like the he is on the edge of a nervous breakdown, weary resigned and tired. “Oh the heartache that finds me the moment I wake…” It’s as intimate as anything he has ever recorded. A 3am phone call from a desperate friend in need of comfort. Naked and wired.

After the comedown comes the hard won optimism. ‘”You sing that song, everybody sings along, so get out and breath the air, and taste the water, and count the stars…” Staples sings on People Fall Down, as if singing to himself. He sees happiness as an escape from the confines of his band and back catalogue. A fresh start, a reinvention. He has spoken in interviews that he felt trapped inside the Tindersticks, that he was performing a role and losing his thirst for the material. People Fall Down is brighter and more dynamic that the proceeding material. The Tiger Lilies provide the drums and bass and Terry Edwards adds more wonderful Sax playing. It swaps the Tindersticks grandiosity for a more relaxed vibe. The double bass and sax conjure up images of Parisian cafés and pitch black coffee.

A tangle of warm brass and the gentle shaking of maracas provide the backbone to She Doesn’t Have To Be Good To Me. A delicate Motown meets Morrissey lament. A deep soul classic slowed to a crawl with added ennui and insight. Staples vocals exploring the hidden spaces in the song.

The album closes with the alt.country styled I’ve Come A Long Way. Tindersticks have always excelled at this kind of thing, so it’s no surprise that the final track oozes class. Chugging brass again provides the musical setting, the instrumental track gently climbing with the vocals and then half way through the guitars and percussion arrive briefly before the song slips quietly to a close. Majestic.