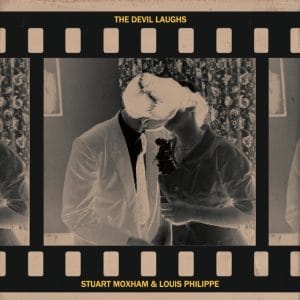 Stuart Moxham and Louis Philippe’s involvement in music runs back decades but their profiles have always remained unfairly low, existing on the peripheries while plying their craft. Moxham is best known for his work with cult post-punk/indie-pop outfit Young Marble Giants, while Philippe has steadily released albums of understated, literate songs since the early ’90s (while also carving out a successful career as a football journalist under his real name Philippe Auclair).

The quiet, unassuming nature of the songs on The Devil Laughs gives the impression of artists happy to be out of the limelight. It might not be an album that particularly projects itself assertively but it has plenty in the way of musical riches to offer.

Opening track Tidy Away is a warm, protective cocoon of a song, quietly glorious in its own little way and a celebration of life’s minutiae and procrastinations (“Tidy away on a lazy old day when you should be out working for more”). It also provides some of the first musical reference points, bringing to mind the likes of Mojave 3, The High Llamas, The Clientele and Paul Heaton.

It Goes Like This sees the pair come together for extra close harmonies, growing the track from small origins to something more widescreen and ornate. Love Hangover is blown along by an alleviating summer breeze and Sky Over Water recalls the soft textures of Norwegian folk-pop duo Kings Of Convenience. Fighting To Lose features long term Moxham/Philippe associate Ken Brake on lead vocal and comes with added poignancy given the sad announcement from Philippe on Twitter that Brake recently passed away.

The quality is maintained as the second half gets underway. Untitled #2 is emblematic of their modest and sensitive songwriting, Moxham emoting how “I cry when I’m happy, I’m glad when I sing”. Come To Me Nancy begins in similarly brittle fashion but soon picks up the pace, finishing with some pleasing briskness. The masterful and endearing Head In A Song meanwhile is proof of what can happen when two accomplished songwriters pool their collective talents.

It’s clear that The Devil Laughs is a labour of love, made as much for the satisfaction of the artists as listeners. It’s one of those albums greater than the sum of its individual parts, a set of songs that beguile and delight in equal measure.