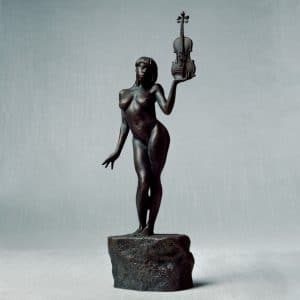 Sudan Archives may sound like the latest earnest Damon Albarn exploration into African music, but the truth is rather more exciting. It’s actually the stage name of one Brittney Parks, a Cincinnati native who learned to play the violin by ear, and then taught herself how to use loop effect pedals, mixing the ensuing electronic production with R&B melodies.

Parks first came to public attention back in 2016 with an extraordinary reconstruction of Kendrick Lamar‘s song King Kunta (renamed Queen Kunta), but apart from a couple of EPs, her recorded material has been surprisingly scant up till now. Her debut album Athena then is our first opportunity to see if she really is as special as she first appeared.

The answer to that question is resoundingly, yes: Sudan Archives is something very special. Athena is a startlingly original, refreshingly all-but-unclassifiable album. All manner of genres are thrown together here – RnB, electro, folk and hip-hop to name but a few. In a similar way to the recent FKA twigs album, what’s produced on Athena may leave you scratching your head at times, but it’s never anything less than thrilling.

Her ambition is clear from the outset. Opening track Did You Know sees her proclaim “When I was a little girl, I thought I would rule the world” only to see her childhood hopes extinguished by more adult insecurities (“I just saw you with some other chick, with some iced out baby hairs…I’m sure you never liked my natty roots”). The fact that the song was co-written with her sister back when they were both teenagers makes it an even more extraordinary opener.

Glorious, perhaps the most straight-up ‘pop’ song on Athena, throws some Irish folk into the mix and sees a cameo from rapper D-Eight, while Black Vivaldi Sonata, as the title would suggest, has more of a classical bent to it. If this gives the impression that one can’t really sure what to expect next from this album, well, even after a few listens, it still possesses the power to surprise.

Standout track Iceland Moss has a gorgeously languid sheen to it with some stirring strings soundtracking its break-up sentiment (“Don’t need your fucking hang-up, tired of this silly dance”). Parks also isn’t afraid to address the more carnal nature of relationships, as Down On Me proves: “Never fucked this way, feels so fucking good… try me past the lies, fuck you till you cry.”

As well as all the musical experimentation, Parks crucially never loses sight of her pop sensibility. Confessions makes painful and poignant observations about identity (“There is a place that I come from, but it’s not where I am welcome”) but places her violin front and centre to unleash a naggingly catchy melody, and Limitless boasts a gloriously soulful refrain of “we’re too cool to admit it, all we have is the internet”. There’s even time, in the brief 38 minutes’ running, to demonstrate her virtuoso violin skills in the instrumental interludes of Ballet Of The Unhatched Twins and House Of Open Tuning II.

Athena announces a major talent in Sudan Archives. It’s original, exhilarating and unafraid to defy genre. As the opening track says, when she was a little girl she thought she’d rule the world. That little girl may well have been correct.